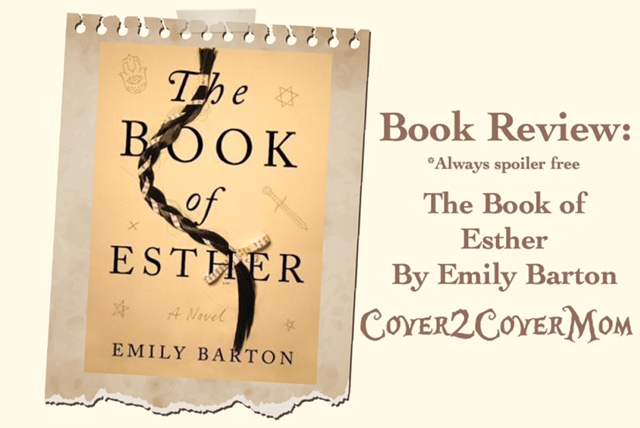 While I was browsing Blogging for Books for my next book to review, The Book of Esther immediately caught my eye.  I mean, just look at that cover.  Gorgeous right?  Once I read the synopsis and found out it was an alternate WWII fiction with fantasy and sci-fi (steampunk) elements, I was sold.  Plus, it seemed as if it was going to include lots of Jewish culture and customs, which peaked my interest as I like to learn about cultures and religions that differ from my own.

Unfortunately, it didn’t exactly pan out that way…

Eastern Europe, August 1942. The Khazar kaganate, an isolated nation of Turkic warrior Jews, lies between the Pontus Euxinus (the Black Sea) and the Khazar Sea (the Caspian). It also happens to lie between a belligerent nation to the west that the Khazars call Germania—and a city the rest of the world calls Stalingrad.

After years of Jewish refugees streaming across the border from Europa, fleeing the war, Germania launches its siege of Khazaria. Only Esther, the daughter of the nation’s chief policy adviser, sees the ominous implications of Germania’s disregard for Jewish lives. Only she realizes that this isn’t just another war but an existential threat. After witnessing the enemy warplanes’ first foray into sovereign Khazar territory, Esther knows she must fight for her country. But as the elder daughter in a traditional home, her urgent question is how.

Before daybreak one fateful morning, she embarks on a perilous journey across the open steppe. She seeks a fabled village of Kabbalists who may hold the key to her destiny: their rumored ability to change her into a man so that she may convince her entire nation to join in the fight for its very existence against an enemy like none Khazaria has ever faced before.

The Book of Esther is a profound saga of war, technology, mysticism, power, and faith. This novel—simultaneously a steampunk Joan of Arc and a genre-bending tale of a counterfactual Jewish state by a writer who invents worlds “out of Calvino or Borges” (The New Yorker)—is a stunning achievement. Reminiscent of Michael Chabon’s The Yiddish Policemen’s Union and Philip Roth’s The Plot Against America, The Book of Esther reaffirms Barton’s place as one of her generation’s most gifted storytellers.

First off, I adored the entire concept behind this book.  The events of WWII are so horrific and tragic, that it doesn’t need to be fictionalized.  It truly is one of those situations where fact is more appalling than anything we could create in our minds.  The idea of re-writing history where the Jewish people were able to raise an army to defend themselves is just brilliant.  I’m sure Emily Barton was not the first author to write a WWII alternate history, but it’s the first one I’ve ever read.  I thought the alternate world that Emily Barton created was very unique and creative.   A few elements that I really enjoyed in this story were the mechanical horses and the Golems.  The mechanical horses were almost a sci-fi and fantasy element combined into one as they were machines, however they also had individual personalities, like real horses.  The Golems, which are clay men given life by a group called the Kabbalists, was by far my favorite element of this book.  Need an army to defend your home?  Make one!

I loved the feminist undertones in The Book of Esther.  Esther really challenged the traditional gender roles of her time and culture.  Barton did such a wonderful job creating a wonderful character who was not only strong, but also very flawed and unsure of herself.  Esther had many doubts along the way, but that’s what I liked about her, she THINKS.  She struggles with her decision to go to the Kabbalists to ask them to turn her into a man in order to lead an army into battle against the Germans.  I mean who wouldn’t have doubts about that kind of life change?  Esther undergoes a lot of inner turmoil throughout the book, which made her feel very realistic.

I also really enjoyed the moral and theological discussions throughout the book.  Two of the main debates centering around slavery, with regards to Esther’s “adopted” brother Itakh, and the debate that centered around the Golems (the clay men) and whether or not they had the right to practice Judaism since they were man made creatures and not of their creator.   I really like books where the characters question ideals and challenge ones that they disagree with.

There were also LGBT+ themes woven throughout the book, which was a pleasant surprise.  I was NOT anticipating a transgendered character in this book.  I wish I could go into details about this particular character, but I would be spoiling a twist in the plot.  Our main character, Esther, also struggles throughout the book with her sexuality.  It was refreshing to read a book with characters whose sexuality wasn’t so cut and dry.

As much as I liked the idea of this book, there were some major drawbacks for me…

Being Jewish, or at least being familiar with Jewish culture, would be helpful while reading The Book of Esther.   I wouldn’t consider myself well acquainted with Jewish culture and customs, so concepts like Shabbat, parshah, Kabbalah, mikvah, etc. were all new to me.  Which wouldn’t be a problem, if the author had provided an explanation for these concepts.  For the most part, I was able to figure out what they were in the context, however there were still words I had to look up to get clarification.  I was a little overwhelmed with the info dumping that was going on.  I think this book was written with the expectation that the reader would be Jewish, or be very familiar with Jewish culture and history.  It would have been beneficial, at least in my opinion, to have included some type of glossary or explanations for those of us who are not familiar with Judaism.  I would think that if you are Jewish, you would probably have a greater appreciation for what Emily Barton has done here.

I had an extremely hard time with the Hebrew words/phrases included in the book.  Often a word was introduced and I had to figure out if the word was a name of a character, a city/location, or some type of custom in the Jewish culture.  Again sometimes this could be figured out within the context of the story, but other times it wasn’t clear.  I do not have any experience with the Hebrew language, so again some type of glossary or footnotes would have been helpful.  I also need to disclose that I do not know for a fact if this is Hebrew… I assume it’s Hebrew?  If anyone has insight on this please let me know.

While I really enjoyed the science fiction, steampunk, and fantasy elements, I didn’t necessarily think all the elements worked well within the story.  For example, the Volkelakes, which are essentially werewolves, seemed very out of place and a random part of the story.  Furthermore, I didn’t really understand how the technology used by the Khazars was so outdated in comparison to the Germans… While the Germans have fighter jets and tanks, the Khazars had man powered flying machines?  The Khazars used carrier pigeons for communication?  It just seemed a little odd to me, almost as if they were stuck in the old days while the rest of the world was in a more modern & technologically advanced state.

I’m sad to report that the ending felt incomplete to me.  The only thing I could think of was that Barton is planning on making this a series.  I tried to do some research into whether or not The Book of Esther will have a sequel, but I want unable to find anything.  There were so many things left unresolved…. I can only hope that Barton’s intention was to write a sequel.

At the end of the day, The Book of Esther was an enjoyable read.  There were parts of the book that I devoured and couldn’t wait to find out what happened next, and there were also aspects that I struggled with.  I am actually not going to give this one a star rating, as I do not think I was the intended audience for this book.  I will leave the decision up to you if you think you should give this one a go.

*I would like to thank Tim Duggan Books & Emily Barton for a copy of The Book of Esther in exchange for an honest review.

“I am Esther, and like my namesake before me, I will save the Jewish people.”

Emily Barton has written three novels so far. Her first, THE TESTAMENT OF YVES GUNDRON, called “blessedly post-ironic, engaging, and heartfelt” by Thomas Pynchon, won the Bard Fiction Prize and was named a New York Times Notable Book of the Year. In reviewing BROOKLAND, Joan Acocella of “The New Yorker” wrote that Barton creates alternate worlds “out of Calvino or Borges.” Barton’s third novel, THE BOOK OF ESTHER, just hit the shelves in June of 2016. Writing for “The New York Times Book Review,” novelist Dara Horn calls it “as addicting as a Jewish ‘Game of Thrones.'”

Barton is the recipient of an artist’s grant from the National Endowment for the Arts and fellowships from the Guggenheim Foundation and the Sustainable Arts Foundation. She lives in the Hudson Valley with her husband, sons, and a cat.

23 thoughts on “Book Review: The Book of Esther by Emily Barton”