If you are here in the U.S. like me, happy Super Bowl Sunday!  My family is getting ready to head out to attend a party & watch the football game.  I could really care less who actually wins though, as I’m not a big fan of either team.  My own team, the Green Bay Packers, had a rough go of it this year.  I guess if I had to pick I’d say I will be rooting for the Philadelphia Eagles since I don’t really care for Tom Brady much.  Who will you be rooting for?  Will you be watching the game tonight?

Let’s get to the books!

*Bookish Weekly Wrap-Up is a weekly post where I feature what posts were published on the blog for the past week, any bookish/blog happenings, what I recently finished reading, what I am currently reading, what I will be reading next, noteworthy posts around the bookish blogosphere, and any interesting bookish articles I came across. 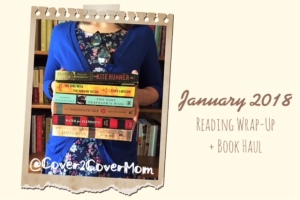 » Simon vs. the Homo Sapiens Agenda by Becky Albertalli

» As Good As True by Cheryl Reid

A powerful and haunting novel of a woman’s broken past and the painful choices she must make to keep her family and her home.

August 1956. After a night of rage and terror, Anna Nassad wakes to find her abusive husband dead and instinctively hides her bruises and her relief. As the daughter of Syrian immigrants living in segregated Alabama, Anna has never belonged, and now her world is about to erupt.

Days before, Anna set in motion an explosive chain of events by allowing the first black postman to deliver the mail to her house. But it’s her impulsive act of inviting him inside for a glass of water that raises doubts about Anna’s role in her husband’s death.

As threats and suspicions arise in the angry community, Anna must confront her secrets in the face of devastating turmoil and reconcile her anguished relationship with her daughter. Will she discover the strength to fight for those she loves most, even if it means losing all she’s ever known?

» Shruti @This is Lit guest posts on @Avalinah’s Books about how to write a review policy for your book blog → How Do I Write a Proper Review Policy? & Evelina also shares some blogging organization tips → What Tools Can Help Me Be An Organized Blogger? Blogging Calendars

» Tired of Tropes: Authors Dish on the Tropes They’re Sick Of

*Personally I’m sick of love triangles, the damsel in distress, and the bad boy

What are you currently reading?

What will you read next?

Have a wonderful week & happy reading