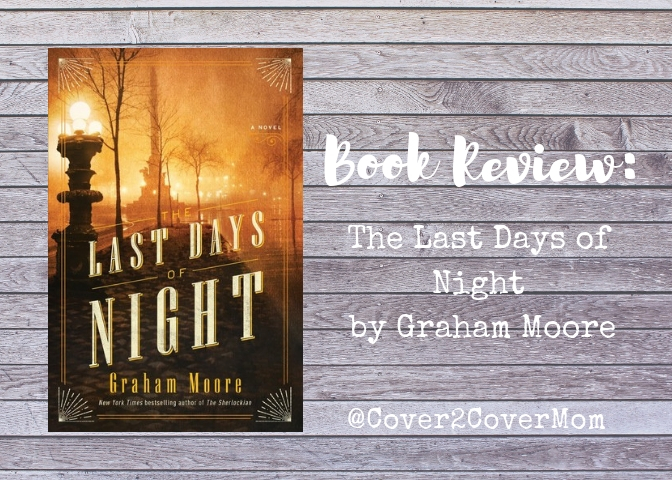 Today I am sharing my book review for The Last Days of Night by Graham Moore: a historical fiction book set in 1888 New York and centers around the feud between George Westinghouse & Thomas Edison. 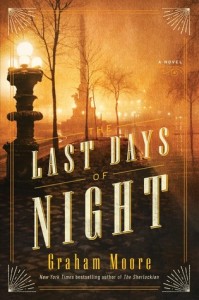 New York, 1888. Gas lamps still flicker in the city streets, but the miracle of electric light is in its infancy. The person who controls the means to turn night into day will make history–and a vast fortune. A young untested lawyer named Paul Cravath, fresh out of Columbia Law School, takes a case that seems impossible to win. Paul’s client, George Westinghouse, has been sued by Thomas Edison over a billion-dollar question: Who invented the light bulb and holds the right to power the country?

The case affords Paul entry to the heady world of high society–the glittering parties in Gramercy Park mansions, and the more insidious dealings done behind closed doors. The task facing him is beyond daunting. Edison is a wily, dangerous opponent with vast resources at his disposal–private spies, newspapers in his pocket, and the backing of J. P. Morgan himself. Yet this unknown lawyer shares with his famous adversary a compulsion to win at all costs. How will he do it?

In obsessive pursuit of victory, Paul crosses paths with Nikola Tesla, an eccentric, brilliant inventor who may hold the key to defeating Edison, and with Agnes Huntington, a beautiful opera singer who proves to be a flawless performer on stage and off. As Paul takes greater and greater risks, he’ll find that everyone in his path is playing their own game, and no one is quite who they seem.

I highly enjoy historical fiction for the fact that I can learn more about events in history that I know little or nothing about.  When I read the description for The Last Days of Night, I was excited to learn more about George Westinghouse & Thomas Edison

The first 30-ish% of this book is fairly slow, so slow in fact that I had a hard time finding the motivation to pick this book back up while pushing through that first 30%.  I began this book in May 2018, but didn’t end up finishing it until December 2018.  Thankfully I was determined to finish this book, because things do eventually pick up.  If you can push through the first 30%, I do think this book is a worth while read.

The Last Days of Night isn’t exactly high on the excitement scale, but I did learn a lot about the Westinghouse/Edison rivalry.  Not familiar with this rivalry?  I wasn’t either.  Basically, Edison & Westinghouse were in a battle over which is the most efficient way to power cities across the United States, direct current or alternating current.  Edison, the original creator of the electric current, felt that despite the limitations of direct current, it was the best method to power cities.  He had in fact hired a man by the name of Nikola Tesla to come up with a better method, but when Tesla brought Edison the solution, Edison brushed him off.  You know who didn’t brush Tesla off?  George Westinghouse!  Here begins the war of the currents.

I was surprised to see how heated & public Edison and Westinghouse’s rivalry played out.  While The Last Days of Night is a FICTIONALIZED account, there were in fact many events in the book that indeed happened in real life.  Like when Edison tried to claim that alternating current was more dangerous than direct current by basically executing stray dogs to show alternating current as a weapon… In real life he also went on to publicly execute a horse and even an elephant, but this is not mentioned in the book.  Edison also helped a man named Harold Brown create the first electric chair for capital punishment purposes.  Of course Edison made sure it was powered by alternating current… Let’s just say things did not go according to plan.

The main character in The Last Days of Night is actually neither Edison nor Westinghouse, but rather a young lawyer by the name of Paul Cravath that Westinghouse commissions to represent him against Edison’s lawsuits.  Paul takes on this challenge despite the fact that it is seemingly a case that he will not be able to win.  Paul is ready to prove himself as a skilled lawyer, but will he be able to do anything necessary to win?  Despite the fact that Paul’s actions were not exactly ethical, I appreciated his drive to win.   I always enjoy clever characters that think outside the box and are highly ambitious.  There are many other key players in this story.  We see appearances J.P. Morgan, Nikola Tesla, and Alexander Graham Bell.  Each playing a key role in the conclusion of this competition.   Another character included is a famous opera singer, Agnes Huntington.  I think Agnes’s character and her relationship with Paul was a nice addition to the story to give the story some lighter moments & break up the serious tone of the book.

The Last Days of Night is probably not going to be for everyone.   Like I mentioned, it isn’t exactly action-packed, BUT parts of it were interesting.  I’d recommend this one for history buffs, or anyone interested in more about the Edison vs. Westinghouse’s “war of the currents.”  I’d also recommend this book to courtroom style dramas – think John Grisham.

*Big thanks to Random House for providing me with a copy of this book via NetGalley in exchange for an honest review. 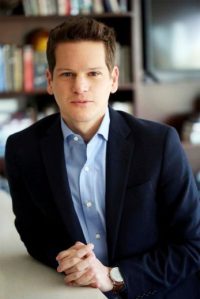 Graham is a New York Times bestselling novelist and Academy Award-winning screenwriter. His screenplay for THE IMITATION GAME won the Academy Award and WGA Award for Best Adapted Screenplay in 2015 and was nominated for a BAFTA and a Golden Globe.

Have you read The Last Days of Night?  If so, what did you think?

1 thought on “Book Review: The Last Days of Night by Graham Moore”