I requested this one during my “NetGalley rampage” back in March/April.  If I am being honest here, I have no clue why I requested this book for review.  YA science fiction isn’t a go-to genre for me by any means… but something about that cover and the synopsis that convinced me to push that request button…

From the author of the Birthmarked trilogy comes a fast-paced, psychologically thrilling novel about what happens when your dreams are not your own.

The Forge School is the most prestigious arts school in the country. The secret to its success:  every moment of the students’ lives is televised as part of the insanely popular Forge Show, and the students’ schedule includes twelve hours of induced sleep meant to enhance creativity. But when first year student Rosie Sinclair skips her sleeping pill, she discovers there is something off about Forge. In fact, she suspects that there are sinister things going on deep below the reaches of the cameras in the school. What’s worse is, she starts to notice that the edges of her consciousness do not feel quite right. And soon, she unearths the ghastly secret that the Forge School is hiding—and what it truly means to dream there.

Rosie Sinclair is a first year film student at the esteemed Forge school, a highly competitive school dedicated to the arts.  Life at Forge is captured by cameras that watch the student’s every move, then televised 24/7 on the Forge show.   The students have a rigorous daily schedule, therefore the students are given sleeping pills nightly to assure they each get 12 hours of sleep to allow the students to get maximum rest for their creativity.  After skipping a few of her sleeping pills, Rosie witnesses some strange things that occur at night while the other students are sleeping.  Just what exactly goes on while they are put to sleep?  Why are students being wheeled out of their dorms at night and returned before morning?  Rosie sets out to figure out what is going on, and who is responsible.

I must say, I really enjoyed how sinister this book turned out to be.  This book is labeled as a science fiction/dystopian novel, but I think psychological thriller is a more accurate description.  O’Brien did a wonderful job at creating doubt in the reader’s mind.  What is really going on behind the scenes at Forge?  Is Rosie right in her suspicions of the administration?  Or is she losing her marbles?  Who is involved?  Who can Rosie trust?  This book definitely had parts that messed with my mind and gave me an uneasy feeling.  There was one concept in particular that both fascinated and horrified me.  Kuddos to O’Brien for coming up with such a intriguing idea.  Obviously I cannot go into what this is exactly because of spoilers, but I thought it was brilliant.

When I picked up The Vault of Dreamers, I thought a good chunk of the book was going to be about the students and their various art endeavors while under the pressures of being on a reality TV show.  That is in fact NOT what this book was about. Sure, these things play a small role in this book, but the majority of the book centers around the conspiracy that something is going on at the Forge school at night while the students sleep.  Don’t get me wrong, the conspiracy storyline was interesting, I was just anticipating a little bit more about life at the school and the television show prior to jumping into the conspiracy theory.  Furthermore, with this book being labeled as science fiction, I was really expecting more science fiction elements.  The book takes place in the 2050’s, but the technology did not seem particularly advanced.  Actually, it felt more like it was taking place during present day then in the future.  I would have liked to see more futuristic elements to make it feel like the story was actually taking place in the future.

Rosie, the main character, was a bit of a struggle to connect with.  I think this has to do with the fact that we were abruptly thrown into her life at Forge, without any back story.  I wasn’t a fan of her at first, but she did grow on me as the story went on.  We do get tiny glimpses into her life before coming to Forge throughout the book, but it may have helped the reader to connect with her more if we had heard her backstory BEFORE going to Forge.  At times I would shake my head at her decisions that put herself in bad spots, but let’s be honest here, that’s what teenagers do.  She did have some redeeming qualities; she was caring, noble, and brave.  I did admire that she was willing to risk her life and safety to uncover the truth.

I would have liked to see more character development in the supporting characters. We don’t really learn much about anyone else in this book.  The characters are just sort of there.  We do learn a little about Linus and Burnham, which brings me to my biggest worry while I read reading this one: I was worried this book was going to include the dreaded love triangle.  I am happy to report there wasn’t exactly a love triangle, more like the hint of a looming one.  It is one of those situations where there is a relationship between two of the characters, but there is another guy in the picture that shows a few hints of jealousy.  I would not be surprised if this develops into a love triangle, but for now it wasn’t an issue for me.

I was pleasantly surprised with the ending.  I wasn’t surprised so much by what was going on at the school, as it was hinted at throughout the book, but rather I was surprised with how things turned out for our main character.  It was refreshing to see a YA book with an ending that was not unrealistically tidied up and where everyone lives happily ever after.  You may find that you end this book with more questions then answers, but I assume these things will be answered in the next installments.

Overall, I found this to be an okay read, but I wanted more from it.  While I thought the premise of this book was very unique, I think the book was a little underdeveloped in regards to the plot and characterization, as well as underwhelming in the science fiction department. Did it capture my interest enough to continue on with the series?  Eh, maybe.  It isn’t going to be high on my priority list though.

*Big thanks to Roaring Brook Press  for providing me with a copy of this book via NetGalley in exchange for an honest review.

Caragh M. O’Brien is the author of the BIRTH 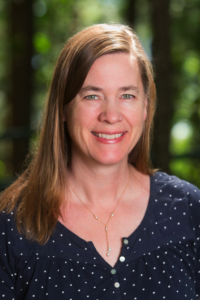 MARKED trilogy and THE VAULT OF DREAMERS series, both from Macmillan/Roaring Brook Press. Born in St. Paul, Minnesota, Ms. O’Brien was educated at Williams College and earned her MA in the Writing Seminars from Johns Hopkins University. Her young adult science fiction has been honored by the YALSA Best Fiction for Young Adults, the Amelia Bloomer Award, the Junior Library Guild, and numerous state reading lists. A former high school English teacher, she now writes young adult novels full time from her home in rural Connecticut. She also loves to read.