Buy on Amazon • Add on Goodreads • Read an Excerpt

Kirsten Raymonde will never forget the night Arthur Leander, the famous Hollywood actor, had a heart attack on stage during a production of King Lear. That was the night when a devastating flu pandemic arrived in the city, and within weeks, civilization as we know it came to an end.

Twenty years later, Kirsten moves between the settlements of the altered world with a small troupe of actors and musicians. They call themselves The Traveling Symphony, and they have dedicated themselves to keeping the remnants of art and humanity alive. But when they arrive in St. Deborah by the Water, they encounter a violent prophet who will threaten the tiny band’s existence. And as the story takes off, moving back and forth in time, and vividly depicting life before and after the pandemic, the strange twist of fate that connects them all will be revealed

Station Eleven was selected as June’s book of the month for my book club.  I was actually quite excited to read this book as I don’t read much science fiction.  I was even more interested when I discovered it was a post apocalyptic book.  I know, I know.  Many people are over the dystopian & post apocalyptic genres, however I am late to the game and have not read many of these types of books. I have read a few books in the dystopian genre (The Hunger Games and The Maze Runner series), but I really haven’t read any books in the post apocalyptic realm.  Actually, to be honest, I didn’t even know the difference until I did a little research and stumbled upon a blog post from author Julie Kagwa that cleared it up for me.  If you are a bit foggy on the difference too, you can read the post here → Dystopian vs. Post-apocalyptic

Station Eleven is about life after a world-wide pandemic.  I find the concept of a pandemic utterly terrifying.   The idea of an illness so deadly and widespread, that virtually no one can survive  ((shudder)).  Actually, this book prompted me to look into pandemics throughout history, which only freaked me out more.  Since 1918, there have been 4 pandemics in the United States.  The Spanish flu of 1918-1919, the flu outbreak of 1957-1958, the flu outbreak of 1968-1969, and H1N1 (swine flu) of 2009-2010.  Obviously, I remember the H1N1 outbreak of ’09-’10 and was personally effected by it.  My son tested positive for H1N1 in 2009 when he was 3 years old.  He was hospitalized for 3 days, and it was the most terrifying experience of my life.  Of course these pandemics were nothing like the Georgia Flu in Station Eleven, but it is still fascinating (and terrifying) to read about.  If you want to freak yourself out and learn more about these pandemics, you can read more about them here → Pandemic Flu History.

After the devastation of the Georgia Flu, those left behind are living in a post apocalyptic world.  There is no instant communication, media, modern modes of transportation, lights, cooking appliances, heat, etc. etc.  Civilization, as we know it, falls apart.  This really made me think about how much of the conveniences of modern life that we take for granted.  There were a few instances where I challenged the believability of some of the events in the book, but overall, I feel this book was a fairly accurate depiction of how life after a world-wide pandemic would look like.  The characters all had to embrace their new reality: having to do things the “old fashion” way.  Overall, I really enjoyed the storyline.  With extremely short chapters and steady plot, the tempo of this book is very quick paced.

The book is made up of the collective experiences of Jeevan, Miranda, Kirsten, and Clark.  These characters are all tied together by a common link, Arthur.  I enjoyed how the Arthur tied all the primary characters to Arthur and how they are all woven together.  We not only got to see the individual stories, but also their connections to each other.   The idea of the antagonist in this book, the prophet, was so believable for me.  In these types of situations, there will always be people who will take advantage and use it as a climb to a position of power.  While I found the characters in Station Eleven compelling and likable, I would have liked more character development.  Due to a high volume of primary and secondary characters, we never really learn much about any character in particular, aside from Arthur through the eyes of others.  Station Eleven is more of a plot-driven story, therefore there isn’t much character development going on.  I never really developed any type of strong emotional attachment to the characters.

There were definitely varied opinions about Station Eleven amongst the members of our book club.  Of the 5 people who actually finished the book, 1 loved it, 2 enjoyed it, and 2 didn’t care for it.  For the 2 that struggled with it, I think they were in agreement that they didn’t care for the abruptness of the writing style or the time line of the story.  I would agree that at times, Station Eleven escalated quickly, which can make the plot seem overly abrupt.  However, we are talking about a post apocalyptic world here… I would think if the worldwide pandemic killing off most of the human population, shit would hit the fan pretty quickly, thus being abrupt.

Even though there were conflicted feelings about this book within our book club, I felt this was a wonderful book selection for a book club because it sparked a lively discussion.   To me, good book club books don’t have to all be 5-star reads, but that they open up dialogue.  What I loved the most about this book was that it made me think.  What would I do in these situations?

I would recommend this book to anyone that enjoys the post apocalyptic genre and likes quick paced and plot driven stories.  If you only enjoy books that are character-driven, this is probably not the book for you.

“Because survival is insufficient.”

“A fragment for my friend –

Silent, my starship suspended in night”

“First we only want to be seen, but once we’re seen, that’s not enough anymore.  After that, we want to be remembered.”

“We traveled so far and your friendship meant everything.  It was very difficult, but there were moments of beauty.  Everything ends.  I am not afraid.”

I really struggled with my rating of this book.  On one hand, I really did enjoy the book.  On the other, I would have liked a little more character development… I ended up going with 4 stars based on the fact that it was a great book club selection that prompted a great discussion. 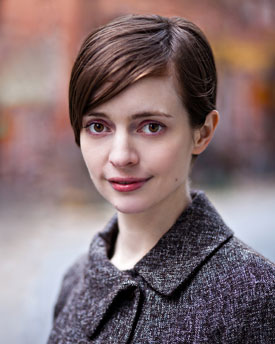 Emily St. John Mandel is the author of four novels, most recently Station Eleven, which was a finalist for a National Book Award and the PEN/Faulkner Award, and won the 2015 Arthur C. Clarke Award, the Toronto Book Award, and the Morning News Tournament of Books, and has been translated into 27 languages. A previous novel, The Singer’s Gun, was the 2014 winner of the Prix Mystere de la Critique in France. Her short fiction and essays have been anthologized in numerous collections, including Best American Mystery Stories 2013. She is a staff writer for The Millions. She lives in New York City with her husband and daughter.