If you follow my blog posts, you may remember that I had scored tickets to go see Stephen King!  You can read all about the stress and excitement of scoring these hard to get tickets here → Bookish Dreams Do Come True! Stephen King Book Tour.

Last Thursday, June 9th,  finally came and went…I am still in disbelief that I got the chance to see Stephen King speak.  I mean who HASN’T read one of his 50+ novels or at the very least, heard of him?  This event was HUGE for our city… I think the last time Stephen King came to Dayton, Ohio was in the 1980’s?  Don’t quote me but I thought it was ’88?  Can I get a fact check on that one?  If that is indeed correct, it would have been almost 30 years since he was last here!

END_OF_DOCUMENT_TOKEN_TO_BE_REPLACED 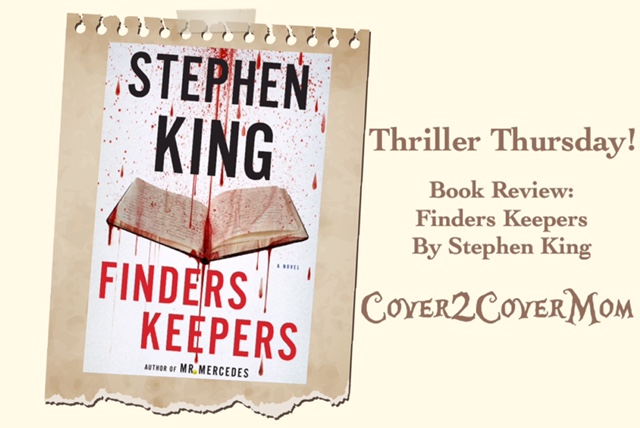 “Wake up, genius.” So begins King’s instantly riveting story about a vengeful reader. The genius is John Rothstein, an iconic author who created a famous character, Jimmy Gold, but who hasn’t published a book for decades. Morris Bellamy is livid, not just because Rothstein has stopped providing books, but because the nonconformist Jimmy Gold has sold out for a career in advertising. Morris kills Rothstein and empties his safe of cash, yes, but the real treasure is a trove of notebooks containing at least one more Gold novel.

Morris hides the money and the notebooks, and then he is locked away for another crime. Decades later, a boy named Pete Saubers finds the treasure, and now it is Pete and his family that Bill Hodges, Holly Gibney, and Jerome Robinson must rescue from the ever-more deranged and vengeful Morris when he’s released from prison after thirty-five years.

Not since Misery has King played with the notion of a reader whose obsession with a writer gets dangerous. Finders Keepers is spectacular, heart-pounding suspense, but it is also King writing about how literature shapes a life—for good, for bad, forever.

This is the second installment in King’s Bill Hodges trilogy.  You can read my review of the first installment, Mr. Mercedes, by clicking the link → Book Review: Mr. Mercedes by Stephen King.  I started this series in anticipation of Stephen King’s book tour this summer, the End of Watch Book Tour, which I am happy to announce that I SCORED TICKETS TO!!!!! Check out my post about scoring the tickets → Bookish Dreams Do Come True! Stephen King Book Tour

Like Mr. Mercedes, I chose to listen to Finders Keepers via audiobook. Will Patton narrates the first two books in this trilogy, and I assume will continue on with the third installment.  He has such an interesting voice that is so versatile and perfect for reading crime fiction.  I can’t stress enough that listening to this via audiobook is the way to go!

Finders Keepers could very easily be a stand alone book.  Bill Hodges, Holly, and Jerome, the unlikely crime fighting trio from Mr. Mercedes, are not main characters in this installment.  There is almost no plot advancement from the first book.  This book can be best described as a side story to fill the time lapse between the first and the third book.

This installment was a lot more mild on the screwed up scale.  It was almost a nice break in the series since the first installment was so intense… Seriously though, it was messed up.   I am anticipating the third installment to turn it up a notch.  Now that I think about it, I may need to start mentally preparing myself now.

Making Peter, the protagonist, a teenaged boy was an excellent decision on King’s part.  There is something so vulnerable about kids and teenagers that makes it so easy for me to connect to, possibly because it tugs at my motherly instincts.  It was easy to sympathize with Peter and his situation.  Who wouldn’t root for a boy that would do anything to help his family through hard times?  Not only did he bail his parents out of a financial crisis, but he was willing to give up his most priced possessions in order for his little sister to attend the school she wanted.  I respected his selflessness.  Under the circumstances, I would have made the same choices.

I loved the plot, especially the concept of an antagonist with a crazy obsession centering around literature.   So obsessed in fact that he would go as far as murdering an author out of resentment over an outcome of a book. If you can believe it, the antagonist in Finders Keepers was actually much more tame in comparison to the antagonist in Mr. Mercedes. That does not mean he was not terrifying, he just seemed a little more… human? real?  I’m not sure what it is, but Morris, the antagonist, was definitely a believable character.  I wonder if Stephen King has ever thought of the possibility of a crazed fan doing him harm… I am assuming he has.  Does this thought keep him awake at night?   Does Stephen King even experience fear?  The things he creates in his mind ((insert shiver of fear))…   I think one of the things that makes this book so terrifying is that it is believable.  If I read this story in a newspaper, it really wouldn’t surprise me overmuch.  Sometimes real life can be just as terrifying as fiction.

Bottom line: Stephen King has proved that he could make the jump to crime fiction.  His character development, particularly the antagonists, are second to none.  If you are a fan of crime fiction, you need to read this series!

“For readers, one of life’s most electrifying discoveries is that they are readers—not just capable of doing it (which Morris already knew), but in love with it. Hopelessly. Head over heels. The first book that does that is never forgotten, and each page seems to bring a fresh revelation, one that burns and exalts: Yes! That’s how it is! Yes! I saw that, too! And, of course, That’s what I think! That’s what I FEEL!”

Have you read this series?  What were your thoughts?  Which of Stephen King’s books are your favorites?

Stephen King is the author of more than fifty books, all of them worldwide bestsellers. His recent work includes Doctor Sleep and Under the Dome, now a major TV miniseries on CBS. His novel 11/22/63 was named a top ten book of 2011 by The New York Times Book Review and won the Los Angeles Times Book Prize for Mystery/Thriller as well as the Best Hardcover Book Award from the International Thriller Writers Association. He is the recipient of the 2003 National Book Foundation Medal for Distinguished Contribution to American Letters. He lives in Bangor, Maine, with his wife, novelist Tabitha King.

As some of you may remember, I have mentioned that Stephen King is coming to my hometown as part of his End of Watch Book Tour.  Since I live in Ohio, not  known for being a hot spot for author appearances, this is a HUGE deal!  This book tour is to promote the final installment of the Bill Hodges Trilogy, End of Watch.  Check out my review of the 1st installment, Mr. Mercedes → Book Review: Mr. Mercedes by Stephen King, and my review of the second installment, Finders Keepers → Book Review: Finders Keepers by Stephen King.

END_OF_DOCUMENT_TOKEN_TO_BE_REPLACED

#1 New York Times bestseller! In a high-suspense race against time, three of the most unlikely heroes Stephen King has ever created try to stop a lone killer from blowing up thousands. “Mr. Mercedes is a rich, resonant, exceptionally readable accomplishment by a man who can write in whatever genre he chooses” (The Washington Post).

In the frigid pre-dawn hours, in a distressed Midwestern city, desperate unemployed folks are lined up for a spot at a job fair. Without warning, a lone driver plows through the crowd in a stolen Mercedes, running over the innocent, backing up, and charging again. Eight people are killed; fifteen are wounded. The killer escapes.

In another part of town, months later, a retired cop named Bill Hodges is still haunted by the unsolved crime. When he gets a crazed letter from someone who self-identifies as the “perk” and threatens an even more diabolical attack, Hodges wakes up from his depressed and vacant retirement, hell-bent on preventing another tragedy.

Brady Hartsfield lives with his alcoholic mother in the house where he was born. He loved the feel of death under the wheels of the Mercedes, and he wants that rush again. Only Bill Hodges, with two new, unusual allies, can apprehend the killer before he strikes again. And they have no time to lose, because Brady’s next mission, if it succeeds, will kill or maim thousands.

Mr. Mercedes is a war between good and evil, from the master of suspense whose insight into the mind of this obsessed, insane killer is chilling and unforgettable.

When I found out that Stephen King would be coming to my hometown in June as part of a 12 city book tour to promote the final installment in the Bill Hodges Trilogy, I knew I had to do everything in my power to go.  Ohio isn’t a hot spot for book tours, so I am not going to let this chance to see Stephen King slip away.  Unfortunately, tickets have yet to go on sale.  I have been religiously checking the website for any updates on when tickets will be available, but luck thus far.

Visit the End of Watch Book Tour website for more information and to see if Stephen King is coming to a city near you this summer!

Anyways! In anticipation of Stephen King’s upcoming book tour, I decided that I had better read the first 2 installments in the Bill Hodges Trilogy.  The first being Mr. Mercedes.  I must admit, this was only the second book by Stephen King that I had read. The first Stephen King novel that I ever read was actually Under the Dome, one of his sci-fi works. Now THAT was a big book, coming in at just over 1,000 pages.  I really enjoyed it and Stephen King’s brilliant writing.  I just hadn’t gotten around to reading another one of his books.  Here was my chance!