An unforgettable story of struggle, resilience, and love in the American heartland, this book will forever change the way you think about farmers and family…

At twenty-one, Theresa Weir falls in love with Adrian Curtis, the pride of a prominent local family whose lives and orchard are said to be cursed. Married after only three months, young Theresa finds life with Adrian on the farm far more difficult and dangerous than she expected. Rejected by her husband’s family as an outsider, she slowly learns about the isolated world of farming even as she falls more deeply in love with her husband, a man she at first hardly knew.

During one of my frequent thrift store excursions, I picked this novel up after the cover had caught my eye.  I don’t know what it is about apple orchards, but I find them absolutely compelling.  I quickly flipped the book over and read the synopsis.  Into the cart it went.  It wasn’t until after I had arrived back home to admire my glorious book haul that I saw the words “a memoir” under the title.  My initial reaction was disappointment, I had never read a memoir before.  For some reason, I had it in my mind that memoirs were not entertaining, but purely for educational purposes (i.e. political memoirs, professional memoirs, etc.).  I  stowed it away on my “to-read shelf,” and there it sat for a few months.  When 2016 rolled around, I set a goal to discover new types of books.  I remembered I had accidently purchased this memoir, so I dusted it off and gave it a go.
I’ve never been so happy to be so wrong about a book!  Theresa Weir is an amazing storyteller, so much so that this book did not feel like a memoir, but rather it felt like a well written piece of fiction.  It is not surprising, since Theresa Weir is actually a New York Times and USA Today bestselling mystery/thriller author under the pen name “Anne Frasier.”  You can learn more about the author here.  Weir’s purpose behind this memoir was not to make it totally about herself, but to also give us a different perspective on a controversial issue.  This is not about a single farm, but of all farms in the 1970s & 1980s.

“But the mushroom incident set up a theme that would continue for the rest of my life, an acute awareness of human fragility and the knowledge that, consciously or subconsciously, we are all at the mercy of our own fears, and we are all waiting to die”
– The Orchard

The Orchard begins with a haunting legend called “The Legend of Lily.”  This legend sets the tone for the book, and foreshadows the significance that herbicides and pesticides will play in this novel.  Without giving anything away, I will just say that it is a powerful opening chapter.
Theresa has been through more in her life that anyone should ever have to experience.  Not only has she overcome everything that life has thrown at her, but she has blossomed into a successful woman. I have nothing but respect for Theresa.  The things you will read about her life will boggle your mind.  I can only assume she has a very good therapist.

As much as this novel is about Theresa, it is also about the environmental implications of chemicals used by farmers during this time.  Theresa sheds light on a very important perspective here, not of the consumers, but of the farmers who used these chemicals.  Again, I can’t say too much, but I think the story she has to tell is an important one.

This is definitely not a light hearted read.  Tragedy is at every twist and turn, reminding me of a gothic style novel.  Please don’t let that scare you off.  This book is one of those books that leaves an impression and makes you think long after you are finished.  Theresa has a story to tell.  Her story is honest, raw, devastating, and above all, important.

On a personal note, I would like to explain why this novel made such an impression on me.  My mother grew up on a farm here in Ohio from the 1950s through the late 1960s.  After reading this book, I actually had a conversation with her about what it was like being a farmer during that time, and using chemicals that we now know to be harmful.  She remembers her father and brothers going out to spray the crops.  She also remembers how they wouldn’t spray on windy days for fear of causing cloud of chemicals that would drift and contaminate everything in its path.  Unfortunately, not every farmer was as cautious. I never really thought about the implications of these chemicals on these farmers who were using them before we knew the harmful effects.  One of my mother’s brothers is actually battling a rare form of cancer called multiple myeloma.  Like most cancers, the exact cause of myeloma is not known, however environmental exposures to chemicals like herbicides and pesticides have been suggested.  Are the chemicals that he helped his father spray onto crops the cause of his cancer?  There is no way to know for sure, but I think it is safe to say it is likely a contributing factor.

Do you read memoirs?  What are some of the best memoirs you have read?  Comment and share with us! 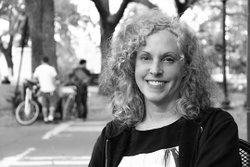 Her first memoir, THE ORCHARD, was a 2011 Oprah Magazine Fall Pick, Number Two on the Indie Next list, a featured B+ review in Entertainment Weekly, and a Librarians’ Best Books of 2011.