*Books included in this batch of mini book reviews: The Invisible Life of Addie LaRue by V.E. Schwab, A Discovery of Witches (All Souls Trilogy #1) by Deborah Harkness, Undercover Bromance (Bromance Bookclub #2) by Lyssa Kay Adams, and Lock Every Door by Riley Sager

» The Invisible Life of Addie LaRue by V.E. Schwab

» Spanning 300 years, The Invisible Life of Addie LaRue takes us on Addie’s journey from 1714 France to 2015 New York City.   I love a good fantasy book with a historical setting, so I really enjoyed watching Addie’s adventures, and misadventures, over the course of her life.  HOWEVER if historical fiction is not your thing, do not let that deter you from reading Addie LaRue – the bulk of the story takes place in 2015, with flashbacks of Addie’s past life in alternating chapters.

» I’m a big fan of Schwab’s descriptive & lush writing style.  Schwab’s writing style, paired with the atmospheric tone, made for a hauntingly beautiful reading experience.  This is the perfect book to pick up in the fall or during the colder months.

» Addie LaRue is a slow burn type of story, so if you are looking for action packed and quick paced, you are not going to find it here.  However, if you are in the mood for a beautiful story of resilience, love, and sacrifice, give Addie LaRue a try.

» I could see some people not being fans of the ending, but I felt like it suited the story perfectly.  Schwab loves to leave things a little messy at the end of her stories, and she also likes to leave some things up to the reader’s imagination.

» I loved all the representation here – many different characters on the LGBTQIA+ spectrum.  The best part is that the fact these characters are queer is simply matter-of-fact, and not any type of plot point.

» This book has great YA to adult crossover appeal.  I feel like this book will appeal to those YA readers that are starting to branch into adult books.

» I found Luc to be a particularly fascinating character and would have liked to see more from him… Possibly some chapters told from his perspective?

› If you liked this book, try ⇒ The Night Circus by Erin Morgernstern

» A Discovery of Witches (All Souls Trilogy #1) by Deborah Harkness

» The second half of this book was a 5-star read for me!  If you can slog through the first half, I truly think the pay off is well worth it.

» I really enjoyed the supernatural elements to this story – witches, vampires, demons, etc.  I was interested in their history, their separate “magic systems” or supernatural powers, and how the groups interacted with one another.

» The plot – after the 50% mark – was just the right amount of history, adventure, mystery, supernatural, and romance.  If you like plots like Outlander & The Da Vinci Code, I think you’ll enjoy this.

» I would recommend listening to this via audiobook.  I thought the narration was well done, and made the first 50% of this book more bearable.

» At the close of this book I was itching to pick up the second book to see what happens to Diana and Matthew.  If this book hadn’t been close to 600 pages, I probably would have jumped right into the next installment.

» The pacing of this book is glacially slow for the first 50% of the book.   Nothing much even really starts to happen until the 30% mark.  For the first half of this book, I was worried it was going to be a 2 to 3-star read.

» The heavy academic tones, especially in the beginning, really bogged down the story.

» You can definitely tell that The Discovery of Witches influenced Stephanie Meyer’s Twilight.  I disliked the controlling vampire aspect to the story.  While this is not as bad as it was in Twilight, it was definitely present.

› Recommended to ⇒ those interested in books with heavy academic tones; those that enjoy books with supernatural beings

› If you liked this book, try ⇒ The Physick Book of Deliverance Dane by Katherine Howe and Outlander by Diana Galbadon 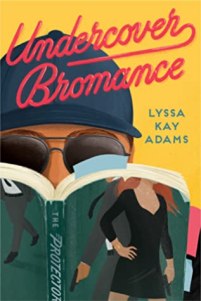 » Much like the first book, The Bromance Book Club, I really enjoyed the humorous dialogue between the characters.  I found myself laughing out loud on multiple occasions.

» I appreciate the author addresses such relevant topics – sexual harassment & sexual assault – within the romance genre, a genre that is typically accused of being pure fluff.

» I feel this sequel was weak in comparison with the first installment.  Undercover Bromance seemed to have lost some of the charm of the members of the Bromance Book Club that I really enjoyed in the first book.  The book club didn’t play as much of a role in this story, which was my favorite aspect of the first book.

» Liv had such a big chip on her shoulder that she was unlikable for the majority of the story.  I felt like the issues she had with her father was the excuse for her to act the way she does, however her relationship with her father was never explored or resolved here.

» The plot to take down Liv’s old boss was cheesy and cliche.  I found myself rolling my eyes a fair amount.

» There was too much repetition – too many winks, grins, etc.

› Recommended to ⇒ those that enjoy the hate-to-love trope

› If you liked this book, try ⇒ The Hating Game by Sally Thorne

» Lock Every Door by Riley Sager

» If you are looking for a fast-paced thriller that will keep you turning the pages, this is the book for you!  Despite the fact that Lock Every Door is over 370 pages, I read this book in 2 sittings.  It is compulsively readable.

» The format of this book – where we start in present day chaos and jump back to the past to find out how we got to the present situation – worked very well here.  You know shit has hit the fan, but how did we get to this point?

» Lock Every Door, at its core, is an exploration of  privilege and entitlement.  I was pleasantly surprised at the depth of some of the themes Sager weaves into the narrative.

» Lock Every Door is an excellent book to pick up in the fall as the eerie tone suits the season very well.  I will fully admit that portions of this book were very unsettling.

» I loved the Gothic building in NYC as the backdrop to this story.  The Bartholomew was almost a character in and of itself.

» While I figured out some aspects of the mystery surrounding Bartholomew, I was NOT expecting the big reveal.  The truth behind what is really going on at Bartholomew was far more sinister than I had anticipated.

» There were a few parts in the story where Jules’ actions were just not believable, I had a hard time suspending my belief that someone would make the same decisions she did.

› If you liked this book, try ⇒ Behind Closed Doors by B.A. Paris