*Books included in this batch of mini book reviews: Dig by A.S. King, Maybe He Just Likes You by Barbara Dee, The Shepherd’s Crown (Tiffany Aching #5) by Terry Pratchett, & The Downstairs Girl by Stacey Lee 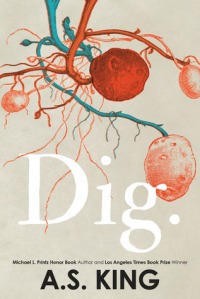 I picked up Dig because it won the Printz award for excellence in young adult literature.

» Dig is one of those stories where you follow multiple perspectives & story lines, but do not know how they relate to each other until much later in the story when they begin to intersect.  This format worked really well here.  I went into this book without reading the synopsis, so I was completely blind.  I almost think this is how the author intended the book to be read.  The book description spoils the format of the book & lessens the impact in my opinion.

» This book almost gave me Breakfast Club vibes in the sense that you have a group of  teens coming together with widely different experiences.  I felt connected to each of the five characters & their separate story lines, but really enjoyed when these stories converged.

» Dig contains very heavy content including racism, sexual assault, dysfunctional families, abuse, terminal illness, domestic violence, and greed.  This is NOT a light-hearted read.  It is one of the books you need to read when you are in the right frame of mind to fully appreciate it.  I always appreciate when authors write very raw & gritty books for the YA audience.

» It takes a LONG time before I became invested in the story & found the story a bit jarring until I got into my reading groove.  It wasn’t until after the 50% mark that I felt connected to the story and characters.

Dig is not going to be for everyone, however if you enjoy hard hitting novels told in a unique way, I’d encourage you to give this book a try.

» Maybe He Just Likes You by Barbara Dee 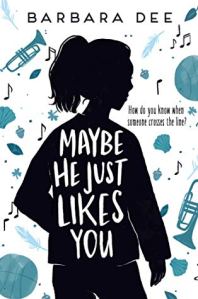 » Maybe He Just Likes You not only tackles sexual harassment, but also goes into consent, bullying, parental loss of employment, problematic friendship dynamics, etc..  There was plenty of important content within these pages.

» I really appreciated how things wrapped up at the end of this book.  While the book had a heavy tone overall, the book ends on a positive and hopeful note.  I truly do think this book will encourage kids to recognize problematic behavior & to speak up when they experience or witness it.

» My only criticism was that I wish there had been some more light-hearted moments in this story to balance out all the heaviness.

This is a timely MG novel that I’d recommend parents/teachers/Librarians to share with their middle school aged kids.  This book could definitely be used as a tool to open dialogue and have important conversations.

› If you liked this book, try ⇒ Speak by Laurie Halse Anderson *YA target audience* 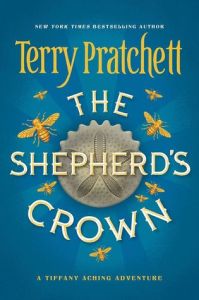 » I’ve mentioned this in every review of these books, but these characters (yes, even the unlikable ones) are some of the most endearing and memorable characters I’ve ever read.   Tiffany Aching is one of my favorite characters in all literature.  I will definitely be measuring up future female lead characters to her, but I doubt anyone will be able to live up to her in my eyes.

» Pratchett’s writing is pure entertainment.  Witty, clever, and highly amusing, you may find yourself laughing out loud on more than one occasion while reading his books.

» This felt more like another installment in the Tiffany Aching series, but not necessarily like the conclusion.  That doesn’t mean I didn’t love this book, just that I wasn’t entirely satisfied with the conclusion.  This is totally understandable considering this was Terry Pratchett’s last novel before his death.  The afterward explained that this was not intended to be the final draft.   I wish Terry had been able to give Tiffany the ending she deserved.  I wonder what this book would have looked like had he had more time.

» The Downstairs Girl by Stacey Lee

» This YA historical fiction follows a 17-year-old Chinese-American maid in the 1890s.  The Downstairs Girl tackles issues like racism, discrimination, sexism, and poverty that many minorities faced post Civil War.

» Jo was an awesome main character.  I appreciated her spunk, grace, bravery, intelligence, and how level-headed she was.  Jo was the type of character that was not satisfied to stand by and watch injustice, but rather the type to speak out for change.

» I really enjoyed the pseudonymous advice columnist aspect here.  I loved “Miss Sweetie” and all her sass & insight.

» The secondary characters were flat & underdeveloped.

» This book included a dark family secret, which was a great addition to the story, however would have been more impactful with more development in the secondary characters.

» While I appreciate that the author touches upon some hard topics, it almost felt like too much.  I would have liked for the author to focus on fewer issues & go more in depth.

› If you liked this book, try ⇒ Salt to the Sea by Ruta Sepetys