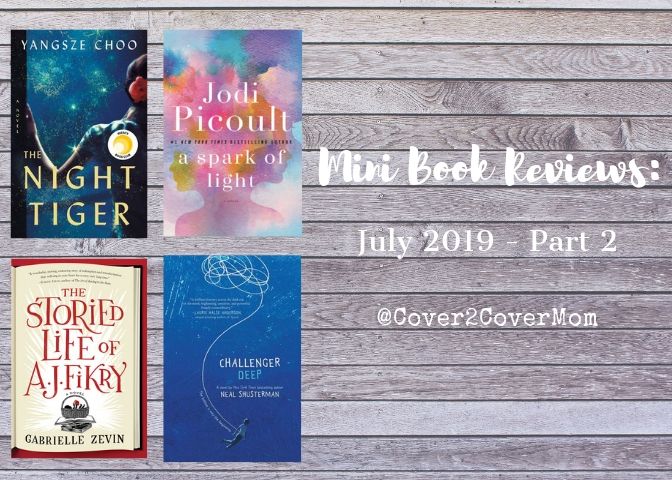 *Books included in this batch of mini book reviews: The Night Tiger by Yangsze Choo, A Spark of Light by Jodi Picoult, The Storied Life of A.J. Fikry by Gabrielle Zevin, and Challenger Deep by Neil Shusterman

» The Night Tiger by Yangsze Choo

Set in Malaya in the 1930s, The Night Tiger weaves the paths of two characters, Ren & Ji Lin, together while unraveling the mystery surrounding a missing finger…

I think the author captured the essence of the setting here, which was the best part of the book for me.  The 1930s Malaya setting felt very authentic and well researched.  I tend to be very critical of my historical fiction.  I want to feel like I am there!  The historical context was on point in The Night Tiger.  I also liked that the author really showcased what it was like for a woman in Malaya in the 30s, particularly one that had ambitions of a career in the medical field.

The Night Tiger is historical fiction with a touch of fantasy/magic realism, which is a mashup that I absolutely adore.  I really enjoyed the fantasy/magic realism elements blended with the Malayan folklore & superstitions.  This story had a very surrealistic & atmospheric feel to it.  Choo tackles many heavy topic throughout The Night Tiger: domestic violence, social hierarchy, gender norms, superstitions, complex family relationships, etc.

The Night Tiger includes a variety of characters, not all exactly likable.  There were a few different characters where you are not sure how to feel about.  Are they “good” or “bad”?  What exactly are their motivations?  This added to the sense of mystery since you didn’t know who to trust for the majority of the book.

On the flip side, the length of the book was far too long and the pacing was way too slow, particularly in the middle.  It took me a long time to trudge through this story, which hindered my enjoyment of the story.

I also did not care for the romance… to be honest, it was off-putting.  In my opinion, the book would have been much stronger without it.

» A Spark of Light by Jodi Picoult

I’ve read 6 of Picoult’s books so far, and have enjoyed each of them.  A Spark of Light was classic Jodi Picoult.  If you are not familiar with Jodi Picoult, she likes to take controversial topics and challenge your stance on the issue by shedding light blurring the lines between “right” and “wrong.”   Her books make for excellent book club selections.

A Spark of Light has an interesting format in which we start at the climax of the story, and work backwards while filling in all the details.  The story starts off in the midst of hostage negotiations at a women’s reproductive health clinic where a gunman has stormed the clinic and taken everyone inside hostage.  The story then works backwards, hour by hour, slowly revealing the character’s back stories and what brought them to the center that day.  I will admit that the format was a bit disorienting at first, but once I got used to working backwards I found it to be a very creative & effective way to tell this story.

I respect that Jodi tackled such a hot button issue like abortion, despite the fact that it must have had a negative impact on her career.  Is there a topic she won’t touch?  Unfortunately when you are dealing with the abortion debate, most people are firmly pro-life or pro-choice.  There isn’t much of a gray area for most people and tensions tend to run high when people debate abortion.  I think Picoult did a wonderful job of showing the perspective of women that choose to have an abortion and got the point across that it isn’t typically an easy decision for most women.

Picoult addresses many issues in the abortion debate that are very relevant right now like all the hoops women need to jump through to safely and legally obtain an abortion, the financial burden of abortion, underage girls obtaining parental consent for an abortion, abortions for fetuses with genetic defects, abortions after a rape, abortion vs. foster care system, etc.  No matter which side of the debate you fall on, you’ve got to admit that this is a very complex issue.

I had a hunch about one of the twists, but the other took me completely by surprise.  Picoult never fails to throw me at least one big curve ball in every book of hers I read.  I’ve never been able to guess every plot twist in any of her books.

» The Storied Life of A.J. Fikry by Gabrielle Zevin

I had actually never heard of this book before one of my book clubs selected it for our book of the month.  Not sure how this little gem escaped my radar, but I am so glad I read it.  The Storied Life of A.J. Fikry will definitely be one of my top reads of 2019!

The Storied Life of A.J. Fikry is about a young widowed man that runs a bookstore on the remote Alice Island.  A.J.’s life is not turning out how he expected it to, causing him to be lonely, jaded, and a bit moody.  One day something is left in A.J’s bookstore that changes the course of his life…

The Storied Life of A.J. Fikry is what I fondly refer to as a “bookworm’s delight.”  Basically, a story that captures the essence of the love for books, bookstores, and the people that love books.

The Storied Life of A.J. Fikry was heartwarming, funny, and emotional.  This is very much a character driven contemporary, thus a slower paced story.  I’d recommend this book to fans of quirky characters & fans of books like A Man Called Ove, The One-in-a-Million Boy, and Eleanor Oliphant is Completely Fine. 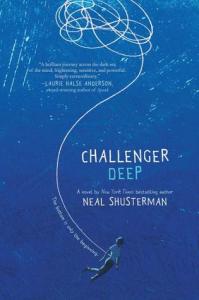 I’ve finally read my first Neal Shusterman book and it was awesome!  Challenger Deep was not what I was expecting at all!  I went into this one blind, so when I started listening to it, I honestly thought this was a pirate fantasy novel…. Let’s just say that I was completely thrown off that this book was so much deeper (see what I did there?) than I ever anticipated.

Challenger Deep is about a boy named Caden who is slowly beginning to sink into the depths of mental illness.  Caden’s family & friends slowly start to notice that Caden is not acting like himself.  Is Caden doing drugs?  Is he abusing alcohol?  What is going on with him?

The way Neal chose to tell this story was very unique and unlike any other book I’ve read.  I must admit, I did not understand what he was trying to do at first, but once I “got it” I was really able to appreciate what he was doing with this story.   Neal really gives us such a personal account of Caden’s mental illness that I felt like I was inside Caden’s head.   Challenger Deep was probably one of the most authentic mental illness representations that I’ve ever read.  The mental illness representation felt so well done, which isn’t surprising since one of Shusterman’s sons struggles with mental illness.

Not only are we given access into Caden’s mind, but we also get to see the impact that his mental illness has on his family, friends, and in other aspects of his life.  This is such an important aspect of mental illness that is often overlooked in books portraying mental illness, or at least the ones I’ve read.  Mental illness effects more than just the individual themselves, it effects everyone around the individual.  Again I assume Shusterman’s own personal experiences influenced this inclusion.

If you’ve ever wanted to be able to better understand someone with schizoaffective disorder and what they go through, I’d highly recommend picking this book up.  I definitely have a new respect for anyone struggling with this disorder & their family/friends.