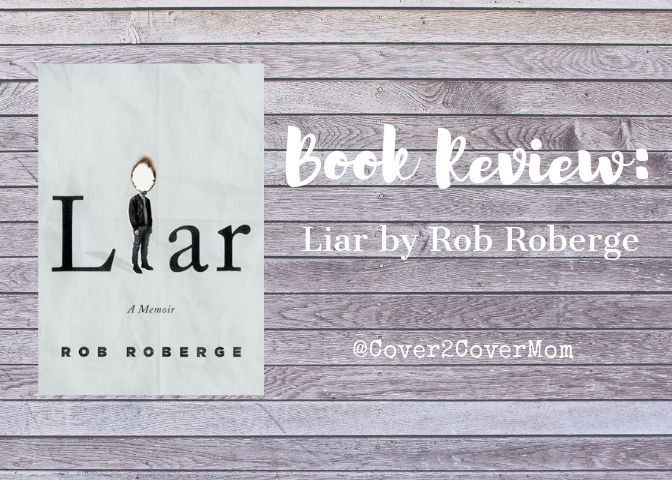 Today I am here to share with you all a book review of a hard-hitting memoir, Liar by Rob Roberge…

An intense memoir about mental illness, memory and storytelling, from an acclaimed novelist.

When Rob Roberge learns that he’s likely to have developed a progressive memory-eroding disease from years of hard living and frequent concussions, he is terrified by the prospect of becoming a walking shadow. In a desperate attempt to preserve his identity, he sets out to (somewhat faithfully) record the most formative moments of his life—ranging from the brutal murder of his childhood girlfriend, to a diagnosis of rapid-cycling bipolar disorder, to opening for famed indie band Yo La Tengo at The Fillmore in San Francisco. But the process of trying to remember his past only exposes just how fragile the stories that lay at the heart of our self-conception really are.

As Liar twists and turns through Roberge’s life, it turns the familiar story of sex, drugs, and rock ‘n’ roll on its head. Darkly funny and brutally frank, it offers a remarkable portrait of a down and out existence cobbled together across the country, from musicians’ crashpads around Boston, to seedy bars popular with sideshow freaks in Florida, to a painful moment of reckoning in the scorched Wonder Valley desert of California. As Roberge struggles to keep addiction and mental illness from destroying the good life he has built in his better moments, he is forced to acknowledge the increasingly blurred line between the lies we tell others and the lies we tell ourselves.

First off, I’d like to mention that the cover for this book fits the story perfectly, which always makes my bookish heart happy.  In fact, the cover is what initially drew me to this title.  After sitting in my NetGalley backlog for WAY too long, I finally decided to give it a go.  I must say, I was pleasantly surprised with this book.

This memoir is Rob Roberge’s story of mental illness & addiction.  Spanning his childhood through current times, Rob takes us on a wild ride that has been his life.  To say that Rob has been through a few traumatic experiences would be an understatement.  I think what is the most heartbreaking part is the reasoning behind Rob writing this memoir.  Rob is showing early signs possible CTE, or Chronic Traumatic Encephalopathy.  If you are unfamiliar with CTE, basically it is a brain condition that can develop in someone that has suffered multiple concussions.   CTE can cause dementia, behavior changes, depression, aggression, etc.  Rob decided to write his memoir before he is potentially unable to do so.  I cannot imagine learning that at some point I could lose my memories and all sense of who I am…

I don’t read many memoirs, but I can say that Liar was told in a very unique way.  If you had told me going into this book that this was a memoir told in second person, I probably wouldn’t have believed you.  Once I realized this book was in second person, I did NOT think this was going to work, but Roberge somehow pulls it off.   The use of second person actually worked really well here and made me feel like I was inside the story.  Another unique aspect about this memoir is that Liar is not told in a linear timeline, but rather jumps all over the place.  Since this book dealt heavily with mental illness, addiction, and memory loss, the jumbled timeline made me feel a bit disoriented, which fit well with the subject matter.   I know it doesn’t sound like this structure would work, but it just does somehow.  I will admit, it was jarring at first, but if you can stick with it, it didn’t take long to adjust to the structure of the book.

This book would be very triggering for anyone suffering from alcoholism, drug addition, mental illness, depression, self harm and/or suicidal thoughts.  If you struggle with any of these, I would probably skip this book because the author goes into a lot of depth with his own struggles in each of these areas.

If you are looking for a brutally honest, dark, & raw memoir that is told in a very creative way and tackles many hard topics, Liar is a must read!  I don’t think this book is going to be for everyone, as many parts are difficult to read, but I could not stop reading this book.

*Big thanks to Crown Publishing for providing me with a copy of this book via NetGalley in exchange for an honest review.

LIAR is Rob Roberge’s fifth book. Previous books include THE COST OF LIVING (Other Voices, 2013), WORKING BACKWARDS FROM THE WORST MOMENT OF MY LIFE (Red Hen, 2010), MORE THEN THEY COULD CHEW (Dark Alley/Harper Collins, 2005) and DRIVE (Hollyridge Press, 2001). He is core faculty at UCR/Palm Desert’s MFA in writing program and, he has taught at a number of other universities. He plays guitar and sings in LA’s The Urinals.

Have you read Liar?  If so, what did you think?