Today I’m back with a review for Alexis M. Smith’s Marrow Island. 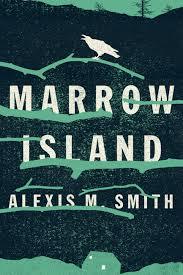 Twenty years ago Lucie Bowen left Marrow Island; along with her mother, she fled the aftermath of an earthquake that compromised the local refinery, killing her father and ravaging the island’s environment. Now, Lucie’s childhood friend Kate is living within a mysterious group called Marrow Colony—a community that claims to be “ministering to the Earth.” There have been remarkable changes to the land at the colony’s homestead. Lucie’s experience as a journalist tells her there’s more to the Colony—and their charismatic leader– than they want her to know, and that the astonishing success of their environmental remediation has come at great cost to the Colonists themselves. As she uncovers their secrets and methods, will Lucie endanger more than their mission? What price will she pay for the truth?

In the company of Station Eleven and California, Marrow Island uses two tense natural disasters to ask tough questions about our choices—large and small. A second novel from a bookseller whose sleeper-hit debut was praised by Karen Russell as “haunted, joyful, beautiful….” it promises to capture and captivate new readers even as it thrills her many existing fans.

What originally drew me to Marrow Island was that it was recommended to fans of Station Eleven, which I read a few years back and enjoyed.  After reading the book description, Marrow Island sounded like it was going to be a creepy & mysterious read.  I was anticipating a story about a woman uncovering the secrets of a cult-like group living on a deserted island.  I was excited for a wild ride!

The story idea for Marrow Island was excellent, unfortunately the execution didn’t exactly pan out.  Not sure where the Station Eleven reference is coming from, because I didn’t get any similar elements or feelings between Station Eleven and Marrow Island… The plot line was incoherent for the majority of the book.  I felt like I was missing big chunks of information that was necessary to make sense of the story.  Ever wonder what an acid trip feels like?  Well Marrow Island felt like an acid trip.  That’s how disorienting it felt.

The majority of this book is about Lucie AFTER the big event that occurred on the island.  Despite the synopsis, we do not get much about the cult or their life on the island.   We are given big chunks of Lucie’s life in the present, mixed with a sprinkling of flashbacks of when Lucie revisits the island and interacts with the group of people living there.  Lucie’s traumatic event revisiting the island causes her to not be in a good place mentally in the present timeline.   Possible content/trigger warning for depression.  The present timeline consists of Lucie freeloading off a man, who she is in some type of superficial relationship with, and spends her days hiking alone in the woods…. Due to Lucie’s present state, and lack of character development, it makes it very hard to be sympathetic.   I typically do not mind timelines that are not linear, but the flashbacks and time hops did NOT work here.

The one aspect about this book that I did appreciate was the environmental issues & the economic issues that occur in the aftermath of a natural disaster.  I think oftentimes right after a natural disaster, many people are eager to help, but as time goes on that help becomes less and less.  People get on with their own lives, but where does this leave those left behind after a natural disaster?  What happens to these communities that are ravaged?  In this situation, an earthquake causes a refinery to be destroyed thus polluting the island.  Where do these displaced people go?  How do they just pick up and restart their lives?  Despite the fact that I had lots of issues with Marrow Island, I will say that this aspect of the book made me think long after I finished.

Coming in at just under 250 pages, Marrow Island is a relatively quick read that you can finish in a few hours.  Even though this was not an enjoyable read for me, at least I didn’t have a ton of time invested in it.

*Big thanks to Houghton Mifflin Harcourt for providing me with a copy of this book via NetGalley in exchange for an honest review.

Alexis M. Smith was born and raised in the Pacific Northwest. Her debut novel, GLACIERS, has been translated into Spanish and Italian. It was a finalist for the Ken Kesey Award for Fiction and a World Book Night 2013 selection. MARROW ISLAND is the winner of a Pacific Northwest Booksellers Association Award and a finalist for a Lambda Literary Award.

Alexis attended Mount Holyoke College, Portland State University, and holds an MFA from Goddard College. In 2015 she received a grant from Regional Arts & Culture Council and a fellowship from the Oregon Arts Commission. She has written for Tarpaulin Sky, The Portland Monthly, Bon Appétit, The Portland Review, and in Lilac City Fairy Tales Vol. III. She lives with her wife and son in Portland, Oregon.

Represented by Seth Fishman at The Gernert Co.

Have you read Marrow Island?  If so, what did you think?