The Great War is over, and change is in the air, in this novel that brings to life the exciting days of early British radio…and one woman who finds her voice while working alongside the brilliant women and men of the BBC.

London, 1926. American-raised Maisie Musgrave is thrilled to land a job as a secretary at the upstart British Broadcasting Corporation, whose use of radio—still new, strange, and electrifying—is captivating the nation. But the hectic pace, smart young staff, and intimidating bosses only add to Maisie’s insecurity.

Soon, she is seduced by the work—gaining confidence as she arranges broadcasts by the most famous writers, scientists, and politicians in Britain. She is also caught up in a growing conflict between her two bosses, John Reith, the formidable Director-General of the BBC, and Hilda Matheson, the extraordinary director of the hugely popular Talks programming, who each have very different visions of what radio should be. Under Hilda’s tutelage, Maisie discovers her talent, passion, and ambition. But when she unearths a shocking conspiracy, she and Hilda join forces to make their voices heard both on and off the air…and then face the dangerous consequences of telling the truth for a living.

Set in London in the 1920s, Radio Girls is a fictionalized account of the early days of the BBC (British Broadcasting Corporation).  Being from the USA, I don’t really have much knowledge of the BBC prior to this book.  In my mind, I always thought of  it as being the radio form of our PBS (Public Broadcasting Service) here in America.

Maisie, the main character, starts off timid & meek, but I really enjoyed seeing her development & growth throughout the story.   At the start of the book, Maisie’s only aspiration in life is to get married.  Basically, she takes the BBC job as a means to support herself until Mr. Right shows up in her life.  I loved the fact that Maisie started at the BBC as a typist, but eventually worked her way up through the ranks, discovering a hidden ambition that she didn’t realize she possessed.  The uncovering of this ambition was thanks to her BBC boss, Hilda.  Hilda took Maisie under her wing and became a mentor to Maisie.  I really enjoyed their relationship throughout the book.  Far too often women in books are cutting each other down, so it was refreshing to see a positive female relationship full of support.

Radio Girls has some wonderful feminist tones throughout the book.  I highly enjoy reading historical fiction that brings to light women’s contributions to history.   While this book focused on women’s contributions to early radio, we also were seeing women starting to enter the work force post WWI, and snippets of the women’s suffrage movement in England during this time.  After reading books like this, I always have a new found appreciation for all the women who have came before me and worked hard to further the rights of women.

This is a fictionalized account, however many of the characters were real people.  I found Hilda Matheson particularly fascinating, and was delighted to find out that the portrayal of her early contributions to the BBC in Radio Girls was not fiction.  After I read this book, I did some more research on Hilda in real life.  Stratford appears to have stayed true to Hilda Matheson’s life, which I always appreciate.  If I am being honest, I would have loved for the story to have been told in Hilda’s perspective or even a dual perspective with Hilda & Maisie.  I feel awful for saying this, but Hilda was a much more interesting character than Maisie.

I do have a few criticisms of Radio Girls.   First off, this book can be a little sluggish at times.  I’m not one to scoff at slower paced historical fiction, BUT there were times I started skimming.  I think this is in part caused by the author’s overly descriptive writing style. Secondly, there are a few odd subplots (romance subplot, spy/investigation subplot, etc etc) that felt like they were thrown in without proper development.

Overall, Radio Girls was a book with a fascinating premise: a look at the early contributions of women in BBC radio.  There were delightful feminist tones throughout, which always makes my heart happy.  I appreciated the insight the author gave us into lesser known history and after reading this book I was compelled to do a little research of my own into the real people featured in this book.  Unfortunately portions of the book felt sluggish and some of the secondary characters outshined the main character.

If you are a fan of historical fiction that features women’s contributions to history, I’d recommend this one to you.    Also, if you’ve already read Radio Girls & enjoyed it, I’d recommend Enchanted Islands by Allison Amend.  The stories are not similar, but they had similar tones & themes.

*Big thanks to Berkley Publishing Group for providing me with a copy of this book via NetGalley in exchange for an honest review. 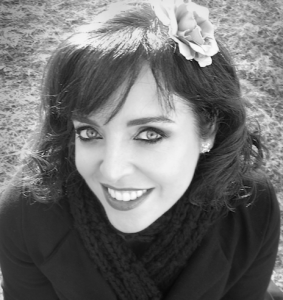 Sarah-Jane Stratford grew up in Los Angeles with a deep love of theatre and literature. After earning a bachelor’s degree in history at UC Santa Cruz, she then obtained a master’s degree in medieval history at the University of York in Britain, where she wrote a thesis about women in the manorial court system which gave her a new appreciation for the modern era.

Sarah-Jane has written articles and essays for a range of publications, including The Guardian, The Boston Globe, The Los Angeles Review of Books, Marie-Claire, Bitch, Slate, Salon, Guernica, and BOMB.

In addition to theatre and activism, Sarah-Jane enjoys knitting (when the project is submitting to her will) and wandering around interesting places. She currently lives in New York.

Have you read Radio Girls?  If so, what did you think?

5 thoughts on “Book Review: The Radio Girls by Sarah-Jane Stratford”