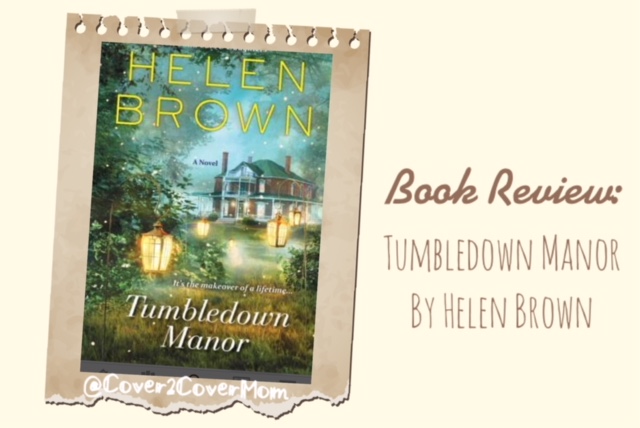 After the cover of Tumbledown Manor caught my eye on NetGalley, I eagerly read the synopsis.  “Chick-Lit” isn’t a genre that typically tickles my fancy, but I had high hopes that this would be a fun & light-hearted read that would serve as some mindless entertainment between heavier books… 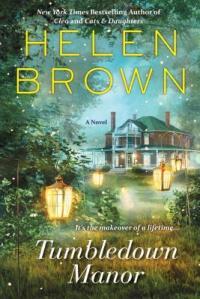 From New York Times bestselling author Helen Brown comes a witty, uplifting novel about a woman who discovers that it’s never too late to build the home–and the life–you’ve always longed for…

The windows rattle. The roof leaks. Every surface cries out to be stripped, painted, or polished. But for writer Lisa Trumperton, the dilapidated manor house that once belonged to her great-grandfather is far more than the sum of its battered parts. It’s the chance for a new start on her own terms. The fact that it’s in the Melbourne countryside of her Australian homeland, far from the deceitful ex-husband she just left behind in New York…well, that’s a bonus.

Lisa sets to work refurbishing Trumperton Manor, assisted by her son, his friends, and a “Gray Army” of retired handymen. But it’s not just her ancestral home that’s being transformed. As she trades her chic Manhattan clothes for jeans and work boots, Lisa is changing and fortifying her relationships with her family and her sense of self. There are floods, fires, and catastrophes, but there are new allies too, including a one-eyed cat, a stubborn cockatoo, and a rugged landscaper with an irresistible grin. Piece by piece, the house is pushing Lisa beyond her old limits, daring her to embrace something bigger, braver, and more rewarding than she ever dreamed.

I am going to start off with a few things I liked about Tumbledown Manor.  One thing I really enjoyed about this one was that Lisa, the main character, is an author who writes a series of books based off the Brontë sisters.  This book was loaded with tidbits of info about the Brontë sisters and their lives.  Being a huge Brontë fan myself, I really appreciated seeing this included in the book.  Secondly, I love the cover, which had originally given me Louisiana vibes, but turns out I was way off as the book actually takes place in Australia.  Unfortunately this was pretty much the extent of my enjoyment of the book…

My biggest hang up about this book is that it has a very similar plotline as the 2003 film Under the Tuscan Sun, which is based off the novel Under the Tuscan Sun.  Now I have not read the book, but I will compare the similarities between Tumbledown Manor and the film version of Under the Tuscan Sun.  In both, a middle aged woman discovers that her husband is having an affair, the woman then proceeds to move to a foreign country.  In both, the woman buys an old run-down house on impulse.  The woman begins to rehab the old house with a cast of eccentric contractors & friends whereupon disasters & surprises ensue.  In both, there is a wedding at the house at the end of the book.  Now, the concept of a single woman buying a run-down house & fixing it up is not unique to these two books by any means, but there was just too many parallels to Under the Tuscan Sun that it was distracting.  Sure there are some slight differences, but the overall plotline is eerily similar.

Lisa, our main character, wasn’t exactly an endearing character, nor did she really have any redeemable qualities.  When a character hits rock bottom at the beginning of a book, I expect the character to make a tremendous amount of growth and personal development over the course of the book, but that didn’t really happen here.  There wasn’t really any sense at the end that Lisa was empowered or standing on her own two feet.  The secondary characters were underdeveloped, so I never felt we got to know anyone other than Lisa in this book, which includes Lisa’s love interest.  The romance was in Tumbledown Manor was awkward to say the least.  Lisa and her love interest had zero chemistry.  Actually, it felt as if they disliked each other for the most part, but it didn’t feel like the hate to love trope.  Whatever it was it did not work for me.

Another aspect that I struggled with in this book was the author’s writing.  At times it just felt awkward and forced.  For example, here are a few separate lines that made me do a double take when I came across them…

“But his pillow was as vacant as the wastelands of Antarctica.”

“It was her favorite pillow, so it probably harbored superbugs.”

“The scar ran in a horizontal line across her torso like a ruler marking the end of a school essay.”

“Scott’s boots lay like a pair of drunken sailors under the step.”

The writing just didn’t flow or connect well in my opinion.  I just couldn’t get into it.

Based off the synopsis I was anticipating the majority of the book to be about Lisa fixing up the house, but this aspect of the plot fell flat.  Aside from a few mentions of uncovering flagstones and such, but we really never get a sense of the house being restored to its former glory.  There just wasn’t much in the book about the rehab process…  Furthermore the big “secret” surrounding Lisa’s family and the manor basically felt thrown into the story without any type of development.  Now that I think of it, there wasn’t anything in the book about the history of the house other than the “plot twist.”  The author really needed to spend more time developing the backstory behind the house and the past inhabitants in order for this type of plot twist to work.

I tend to shy away from chick-lit in general, but every once in a while I dip my toes in when I’m in the mood for something fluffy.  Unfortunately, Tumbledown Manor did not hit the spot for me

*Big thanks to Kensington Books for providing me with a copy of this book via NetGalley in exchange for an honest review. 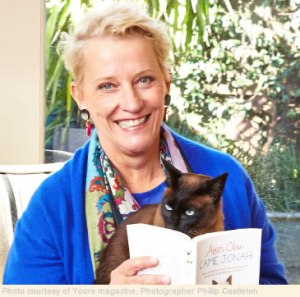 Helen Brown was born and brought up in New Zealand, where she first worked as a journalist, TV presenter, and scriptwriter. Now living in Melbourne, Australia, with her family and their blog-obsessed cat Jonah, Helen continues to write columns for the New Zealand and Australian media. She’s been voted Columnist of the Year several times.

Helen’s memoir CLEO rose to the top of the bestseller list in its first weeks in the United Kingdom, New Zealand, and Australia. It has since sold 2 million copies worldwide and has been translated into more than 17 languages. A major movie is in development.

The sequel, AFTER CLEO CAME JONAH (CATS AND DAUGHTERS in the US), was published in many languages and warmly embraced by readers and critics alike.

Her first novel TUMBLEDOWN MANOR follows the adventures of a woman who reinvents herself after a disastrous 50th birthday. Already a best seller in Australasia, it will be released in the US in May 2016. 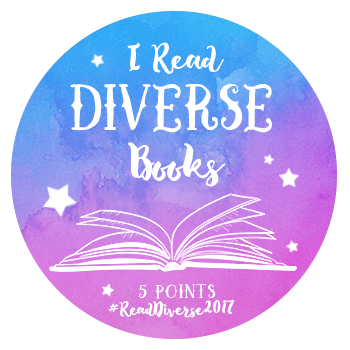