When a fellow member in my book club suggested we read Before the Fall for our book of the month, I jumped at the opportunity & quickly seconded the notion.  Why yes, I did need to read it anyways because it was on my NetGalley eARC TBR list, therefore I already had a copy… Ok, I was killing two birds with one stone, but can you blame me? 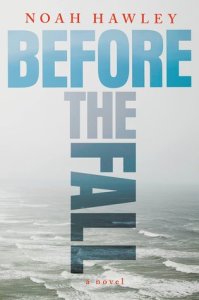 On a foggy summer night, eleven people–ten privileged, one down-on-his-luck painter–depart Martha’s Vineyard headed for New York. Sixteen minutes later, the unthinkable happens: the passengers disappear into the ocean. The only survivors are Scott Burroughs–the painter–and a four-year-old boy, who is now the last remaining member of a wealthy and powerful media mogul’s family.

With chapters weaving between the aftermath of the tragedy and the backstories of the passengers and crew members–including a Wall Street titan and his wife, a Texan-born party boy just in from London, a young woman questioning her path in life, and a career pilot–the mystery surrounding the crash heightens. As the passengers’ intrigues unravel, odd coincidences point to a conspiracy: Was it merely dumb chance that so many influential people perished? Or was something far more sinister at work? Events soon threaten to spiral out of control in an escalating storm of media outrage and accusations–all while the reader draws closer and closer to uncovering the truth.

The fragile relationship between Scott and the young boy glows at the heart of this novel, raising questions of fate, human nature, and the inextricable ties that bind us together.

Before the Fall was definitely not what I was expecting, but that isn’t necessarily a bad thing.  Where I was anticipating an action packed thriller, I actually got a character driven story about survival, fate, & self-discovery.  Sure, this book is about the aftermath of a plane crash, but it is also about the characters BEFORE the crash (hence the title), and how these characters all came to be on the plane in the first place.

Everyone is from someplace. We all have stories, our lives unfolding along crooked lines, colliding in unexpected ways.

I really enjoy how Hawley constructed this story: giving us the event first (plane crash), then weaving back and forth between the present day investigation into the crash and the lives & backstories of the characters leading up to the crash.  We know the “what” but now we need to know the “who” and the “why.”  I wouldn’t classify Before the Fall as a “thriller” in the traditional sense, but that the majority of the book felt more like a mystery.  Despite it not being an action packed read, I still would consider it a page turner.  Through the characters’ backstories, we slowly are given pieces to the puzzle, thus enabling the reader begins to form their own theories into the “who” & the “why.”  Was this an accident?  A plot to take down one of the powerful men on board?  Or was there something more sinister at play here?  I just HAD to know what really happened.

Before the Fall made for a good book club selection because there were lots of things to discuss, my favorite of which was the theme revolving around fate:  how the smallest of decisions & random occurrences can result in a catastrophic outcome.  There are many instances in Before the Fall where you will find that the smallest of choices mean the difference between life or death.  If just one small thing had been changed, would things have turned out differently?  Does everything happen for a reason?

Life is a series of decisions and reactions. It is the things you do and the things that are done to you.

And then it’s over.

Another aspect about this novel that I enjoyed was the portrayal of the “media frenzy” & how the media can spin facts to sensationalize a story.  It also touches upon some of the ethics of journalism & what lengths some are willing to go to get the story.  I actually wish this had been a bigger part of the novel as it was truly fascinating look at how the media can control which facts in a case are highlighted, thus swaying the audience one way or another.

I’m sure some people may have been disappointed with the ending, but I actually liked how everything panned out.  All of my theories from early on were way off, so kudos to Hawley for keeping me on my toes.  Towards the end of the book, I did begin to suspect the direction the book was going to go, but the big reveal was still the best part of this novel.  I was filled with tension and dread while reading scene where we finally figured out exactly what caused the plane crash.  The scariest part about this is that I could totally see this happening in real life, which is terrifying to think about.  It was all very believable.

One of the downsides of this book, at least for me, was the pacing was not always consistent.  I found portions of some of the characters’ backstories to be a little monotonous & irrelevant.  That being said, I was wrapped up in the mystery enough to keep trudging on through the uninteresting parts to get to the more pertinent parts.  Just keep in mind this is a slow burning mystery, and not a fast paced novel.

The way this book is laid out & some of the themes included reminded me a bit of the TV show Lost (but less weird), so if you enjoyed that show, I would recommend this book to you.  Rumor has it that the film rights were sold, and I would be very interested in seeing this book adapted to film.  I do think it would translate well to film, which isn’t a big shock as the author is a screen writer… I’m fairly sure he wrote this book with the film rights in the back of his mind.

Warning: Do not read this book on a plane 🙂

*Big thanks to Grand Central Publishing for providing me with a copy of this book via NetGalley in exchange for an honest review. 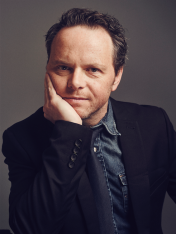 Noah Hawley is an Emmy, Golden Globe, PEN, Critics’ Choice, and Peabody Award-winning author, screenwriter, and producer. He has published four novels and penned the script for the feature film Lies and Alibis. He created, executive produced, and served as showrunner for ABC’s My Generation and The Unusuals and was a writer and producer on the hit series Bones. Hawley is currently executive producer, writer, and showrunner on FX’s award-winning series, Fargo.

15 thoughts on “Book Review: Before the Fall by Noah Hawley”