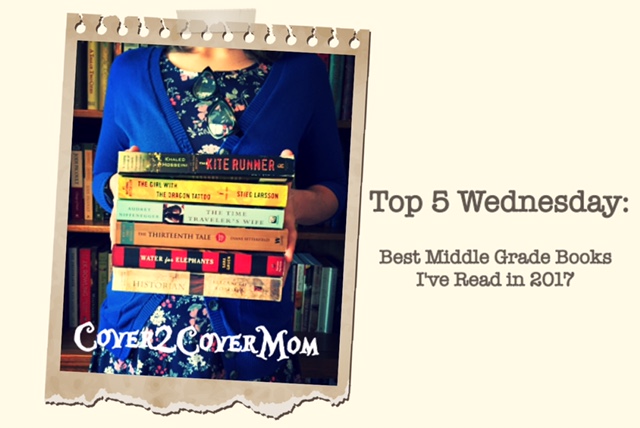 July 12th: Children’s Books
–This can include Middle Grade (but try to recommend more than just Harry Potter and Percy Jackson!) Feel free to talk about your childhood faves or more recent reads.

» When the Sea Turned to Silver by Grace Lin 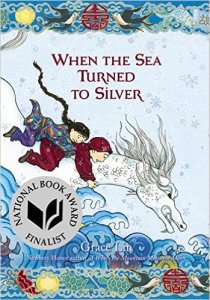 Pinmei’s gentle, loving grandmother always has the most exciting tales for her granddaughter and the other villagers. However, the peace is shattered one night when soldiers of the Emperor arrive and kidnap the storyteller.

A fast-paced adventure that is extraordinarily written and beautifully illustrated, When the Sea Turned to Silver is a masterpiece companion novel to Where the Mountain Meets the Moon and Starry River of the Sky.

What a beautiful middle grade book filled with Chinese mythology and folklore!  I was fully immersed in this ode to storytelling.  This book made me feel like I was sitting in front of a fire being told a story by a beloved elderly relative.  It truly was an enchanting read.

» The Crystal Ribbon by Celeste Lim

In the village of Huanan, in medieval China, the deity that rules is the Great Huli Jing. Though twelve-year-old Li Jing’s name is a different character entirely from the Huli Jing, the sound is close enough to provide constant teasing-but maybe is also a source of greater destiny and power. Jing’s life isn’t easy. Her father is a poor tea farmer, and her family has come to the conclusion that in order for everyone to survive, Jing must be sacrificed for the common good. She is sold as a bride to the Koh family, where she will be the wife and nursemaid to their three-year-old son, Ju’nan. It’s not fair, and Jing feels this bitterly, especially when she is treated poorly by the Koh’s, and sold yet again into a worse situation that leads Jing to believe her only option is to run away, and find home again. With the help of a spider who weaves Jing a means to escape, and a nightingale who helps her find her way, Jing embarks on a quest back to Huanan–and to herself.

I absolutely adored this middle grade book, though I think this book would appeal more to a older middle grade – YA audience.  It baffles me that this book hasn’t received more attention… I’m sure it has to do with the fact that it is a debut novel, thus an unknown author.  If you are a fan of Thanhha Lai and/or Grace Lin, then I would highly encourage you to pick this one up.

Jacqueline Woodson, one of today’s finest writers, tells the moving story of her childhood in mesmerizing verse.

Raised in South Carolina and New York, Woodson always felt halfway home in each place. In vivid poems, she shares what it was like to grow up as an African American in the 1960s and 1970s, living with the remnants of Jim Crow and her growing awareness of the Civil Rights movement. Touching and powerful, each poem is both accessible and emotionally charged, each line a glimpse into a child’s soul as she searches for her place in the world. Woodson’s eloquent poetry also reflects the joy of finding her voice through writing stories, despite the fact that she struggled with reading as a child. Her love of stories inspired her and stayed with her, creating the first sparks of the gifted writer she was to become.

Brown Girl Dreaming is Jacqueline Woodson’s memoir (told in verse) about growing up as an African American during the time of the Civil Rights Movement.  I found it absolutely fascinating seeing this period of history through the eyes of a child.  It really amazes me how Woodson is able to write something so powerful & poignant in so few words.

In the tradition of Out of My Mind, Wonder, and Mockingbird, this is an intensely moving middle grade novel about being an outsider, coping with loss, and discovering the true meaning of family.

Willow Chance is a twelve-year-old genius, obsessed with nature and diagnosing medical conditions, who finds it comforting to count by 7s. It has never been easy for her to connect with anyone other than her adoptive parents, but that hasn’t kept her from leading a quietly happy life…until now.

Suddenly Willow’s world is tragically changed when her parents both die in a car crash, leaving her alone in a baffling world. The triumph of this book is that it is not a tragedy. This extraordinarily odd, but extraordinarily endearing, girl manages to push through her grief. Her journey to find a fascinatingly diverse and fully believable surrogate family is a joy and a revelation to read.

This was such a unique and heartwarming read.  Counting by 7s is more of a slower paced & more character driven story, and has wonderful themes like grief, being different, & nontraditional families.  Quirky characters who march to the beat of their own drum are my absolute favorite, so Willow Chance is definitely a favorite character of 2017.  I think this book definitely appeals to all ages, so if you liked books like A Man Called Ove, The One-in-a-Million Boy,or even Aristotle and Dante Discover the Secrets of the Universe, I think you’d enjoy this one.

» Inside Out & Back Again by Thanhha Lai

For all the ten years of her life, Hà has only known Saigon: the thrills of its markets, the joy of its traditions, and the warmth of her friends close by. But now the Vietnam War has reached her home. Hà and her family are forced to flee as Saigon falls, and they board a ship headed toward hope. In America, Hà discovers the foreign world of Alabama: the coldness of its strangers, the dullness of its food . . . and the strength of her very own family.

I really enjoyed reading a refugee experience, especially since Thanhha Lai went through this herself and states that she shared many of the same experiences that our main character Hà experienced as an immigrant to the U.S. during the Vietnam War.  I think this is an important book for not just children to read, but adults too.

» The Girl Who Drank the Moon by Kelly Barnhill 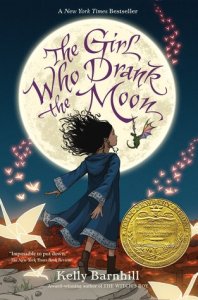 Every year, the people of the Protectorate leave a baby as an offering to the witch who lives in the forest. They hope this sacrifice will keep her from terrorizing their town. But the witch in the forest, Xan, is kind and gentle. She shares her home with a wise Swamp Monster named Glerk and a Perfectly Tiny Dragon, Fyrian. Xan rescues the abandoned children and deliver them to welcoming families on the other side of the forest, nourishing the babies with starlight on the journey.

One year, Xan accidentally feeds a baby moonlight instead of starlight, filling the ordinary child with extraordinary magic. Xan decides she must raise this enmagicked girl, whom she calls Luna, as her own. To keep young Luna safe from her own unwieldy power, Xan locks her magic deep inside her. When Luna approaches her thirteenth birthday, her magic begins to emerge on schedule–but Xan is far away. Meanwhile, a young man from the Protectorate is determined to free his people by killing the witch. Soon, it is up to Luna to protect those who have protected her–even if it means the end of the loving, safe world she’s always known.

The acclaimed author of The Witch’s Boy has created another epic coming-of-age fairy tale destined to become a modern classic.

This was one of those books that completely captivated me, but I can’t exactly put my finger on why.  Filled with magic, secrets, political corruption, lovable side kicks (a swamp monster, tiny dragon & crow), a mother’s determination, and much more, The Girl Who Drank the Moon can be enjoyed at any age.  I would love to see this book adapted to film.

Have you read any good middle grade books this year?

*Feel free to link to your own T5W