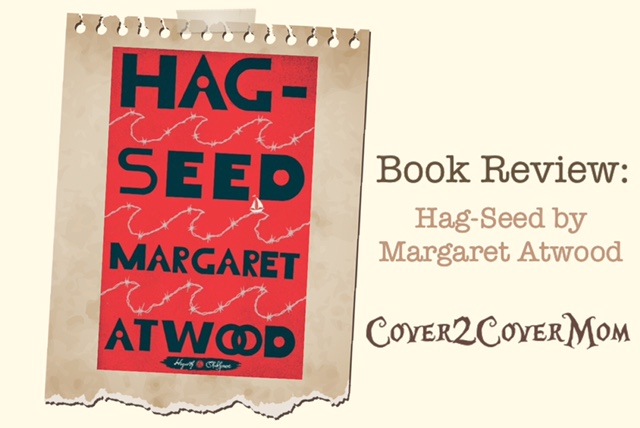 A modern day retelling of Shakespeare’s The Tempest set in a correctional facility?  Sounds weird… I’m in!

When Felix is deposed as artistic director of the Makeshiweg Theatre Festival by his devious assistant and longtime enemy, his production of The Tempest is canceled and he is heartbroken. Reduced to a life of exile in rural southern Ontario—accompanied only by his fantasy daughter, Miranda, who died twelve years ago—Felix devises a plan for retribution.

Eventually he takes a job teaching Literacy Through Theatre to the prisoners at the nearby Burgess Correctional Institution, and is making a modest success of it when an auspicious star places his enemies within his reach. With the help of their own interpretations, digital effects, and the talents of a professional actress and choreographer, the Burgess Correctional Players prepare to video their Tempest. Not surprisingly, they view Caliban as the character with whom they have the most in common. However, Felix has another twist in mind, and his enemies are about to find themselves taking part in an interactive and illusion-ridden version of The Tempest that will change their lives forever. But how will Felix deal with his invisible Miranda’s decision to take a part in the play?

I had never read a Margaret Atwood book before this one, so I went into this one not knowing what to expect.  I had heard it was a retelling of William Shakespeare’s The Tempest, but that it was set in a prison?  This definitely peaked my interest.  I am embarrassed to say that I’ve only read a few of Shakespeare’s plays, and The Tempest is not one of them.  I did read a summary of the play before reading Hag-Seed, which was definitely a smart move.  I really think being familiar with the original play is almost necessary to really “get” Hag-Seed.  This does NOT mean you have to have extensive knowledge by any means, like I said I only read up on it via SparkNotes, and this was sufficient for me.

Felix (Prospero) is a prominent artistic director for a theatre festival until he is ousted by his backstabbing assistant.  After the devastating loss of his beloved job, Felix spends 12 years secluded away from everything and everyone, consumed inside a very dark place.  Eventually, Felix decides to pull himself out of his depression and takes a job as the head of the Literacy Through Theatre program at a local correctional facility.  Here Felix bides his time until the day he can finally take his revenge…

I really appreciated how Atwood spun this modern day retelling of The Tempest.   Like I mentioned, this was my first experience with her work, but I gathered from this book that she is a very clever writer.  If you know anything about The Tempest, you may know that it is full of magic and magical creatures, so I was very interested in how this all was going to play out in a more realistic setting.  Now there isn’t any magic in this book per se, but all the themes from The Tempest (justice, revenge, power, etc) were all present in Hag-Seed.  I feel like Atwood was successful in staying true to the original version, while still giving us a fresh new take on such a classic play.

My favorite part of this book would have to be Feliz’s work in the Literacy Through Theatre program.  Since I come from a Criminal Justice background, I have seen programs like this utilized in a real world setting, and I find them fascinating.  I really enjoyed Felix’s eccentric interpretations of the works of Shakespeare.  I’m always a fan of those who are creative and tend to “think outside the box.”  I hope this isn’t offensive to say, but I was highly amused that Atwood, an author in her 70s, wrote a book set in prison that included old-English swearing, rapping, and dancing… You go Margaret Atwood!

I don’t necessarily think this book is going to be for everyone.  I will be the first to admit that this book is… odd at times.  I would also like to mention that my biggest criticism of Hag-Seed would have to be that the climax of the novel isn’t exactly believable… it was all a little farfetched if I am being honest, BUT this didn’t bother me overmuch in my enjoyment of Hag-Seed.   This wasn’t a 5-star read for me by any means, but I still appreciated what Atwood did here.  I feel like this book will appeal more to a very particular demographic of readers: fans of Shakespeare and the theatre.  This isn’t to say that others will not enjoy this novel, just that they may appreciate it more.

*Big thanks to Hogarth for providing me with a copy of this book via Blogging for Books in exchange for an honest review.

Margaret Atwood was born in 1939 in Ottawa and grew up in northern Ontario, Quebec, and Toronto. She received her undergraduate degree from Victoria College at the University of Toronto and her master’s degree from Radcliffe College.

Throughout her writing career, Margaret Atwood has received numerous awards and honorary degrees. She is the author of more than thirty-five volumes of poetry, children’s literature, fiction, and non-fiction and is perhaps best known for her novels, which include The Edible Woman (1970), The Handmaid’s Tale (1983), The Robber Bride (1994), Alias Grace (1996), and The Blind Assassin, which won the prestigious Booker Prize in 2000. Atwood’s dystopic novel, Oryx and Crake, was published in 2003. The Tent (mini-fictions) and Moral Disorder (short stories) both appeared in 2006. Her most recent volume of poetry, The Door, was published in 2007. Her non-fiction book, Payback: Debt and the Shadow Side of Wealth ­ in the Massey series, appeared in 2008, and her most recent novel, The Year of the Flood, in the autumn of 2009. Ms. Atwood’s work has been published in more than forty languages, including Farsi, Japanese, Turkish, Finnish, Korean, Icelandic and Estonian. In 2004 she co-invented the Long Pen TM.