Does this book really need any introduction? 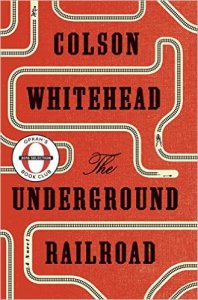 Cora is a slave on a cotton plantation in Georgia. Life is hellish for all the slaves but especially bad for Cora; an outcast even among her fellow Africans, she is coming into womanhood – where even greater pain awaits. When Caesar, a recent arrival from Virginia, tells her about the Underground Railroad, they decide to take a terrifying risk and escape. Matters do not go as planned and, though they manage to find a station and head north, they are being hunted.

In Whitehead’s ingenious conception, the Underground Railroad is no mere metaphor – engineers and conductors operate a secret network of tracks and tunnels beneath the Southern soil. Cora and Caesar’s first stop is South Carolina, in a city that initially seems like a haven – but the city’s placid surface masks an insidious scheme designed for its black denizens. Even worse: Ridgeway, the relentless slave catcher, is close on their heels. Forced to flee again, Cora embarks on a harrowing flight, state by state, seeking true freedom.

As Whitehead brilliantly re-creates the unique terrors for black people in the pre-Civil War era, his narrative seamlessly weaves the saga of America from the brutal importation of Africans to the unfulfilled promises of the present day. The Underground Railroad is at once a kinetic adventure tale of one woman’s ferocious will to escape the horrors of bondage and a shattering, powerful meditation on the history we all share.

The Underground Railroad is told through the experiences of Cora, a third generation slave.  Cora’s Grandmother, Ajarry, was kidnaped from her village and transported to America, then forced into slavery and sold into the Randall family.  Here is where Ajarry lives and dies, and where Cora is eventually brought into the world.  Cora is born into a life of turmoil that no one wants for their child.  Her mother, Mabel becomes the first runaway to escape a Randall plantation, leaving behind everything to gain freedom, even her only daughter.  From an early age, Cora has to fend for herself if she wants to survive, and that is just what Cora is: a survivor…

“Stolen bodies working stolen land.  It was an engine that did not stop, its hungry boiler fed with blood.”

This book is the history of slavery in America, shown to us through Cora’s journey.  At its root, this book really isn’t about Cora, or any of the other characters for that matter, so if you are looking for in depth character development, or a character driven story, this isn’t going to be it.  Cora represents all slaves and their collective experiences with the secondary characters serving as catalysts to move Cora along on her quest.  This is a very plot driven story full of adversity.  The story almost reminded me of Homer’s The Odyssey.  Like Odysseus, Cora has to face many challenges along the way in her quest for freedom.

“Here’s one delusion: that we can escape slavery.  We can’t.  Its scars will never fade.”…”And America, too, is a delusion, the grandest one of all.  The white race believes- believes with all its heart – that it is their right to take the land.  To kill Indians.  Make war.  Enslave their brothers.”

In The Underground Railroad, Colson takes a few liberties with regards to the historical timeline and with his portrayal of the underground railroad itself.  The goal here was to be more informative then historically accurate.  Cora’s journey takes us from Georgia, to South Carolina, to North Carolina, to Tennessee, to Indiana and beyond.  Each stop in Cora’s journey she faces a new horror in the history of slavery.  Horrors like forced sterilization, the Tuskegee Study, “coon shows” (more commonly known as minstrel shows or “blackface.”), and the “freedom trail.”

Whitehead’s depiction of the underground railroad was very refreshing and unexpected, I was not anticipating the touch of magic realism.  In reality, the Underground Railroad was a system of routes in which slaves would escape from their owners to the northern states or Canada.  Along the way, there would be safe houses (stations) with people (conductors) who would help the slaves along the route to freedom.

This is how slavery should be depicted in literature: raw and uncensored.  I “learned” about slavery in school, but nothing like this.  Men, women, and children were violently kidnaped from their villages, placed on overcrowded ships (where they faced illness, abuse, and deplorable conditions) and sent to America.  Once in America, they were paraded naked in front of people and sold like livestock, forced to live and work ((and by work of course I mean grueling back breaking physical labor)) in horrifying conditions, abused physically ((and by abused physically, I mean beaten to near death)), sexually, and mentally… the list goes on.  It is one thing to read about slavery in text books, but it is a whole new ballgame to experience it in fiction.  Text books are so matter of fact which feels detached, whereas in fiction, the reader is able to form an emotional connection to the situation.

Reading The Underground Railroad was uncomfortable.  It is graphic, horrifying, and heartbreaking.  I felt ashamed of my race.  That’s right, I said it.  We should feel ashamed.  Our country was built on slavery and racist ideals, which is something that we have conveniently forgotten over the years.  I think every white person should read this book.  While we cannot go back and change the past, we can learn from it and make an effort to continue to educate ourselves for a better future.   This book is such an important reminder of where we have been, and how much further we still need to go.

“The whites come to this land for a fresh start and to escape the tyranny of their masters, just as the freemen had fled theirs.  But the ideals they held up for themselves, they denied others.”…”She didn’t understand the words, most of them at any rate, but created equal was not lost on her.  The white men who wrote it didn’t understand it either, if all men did not truly mean all men.  Not if they snatched away what belonged to other people, whether it was something you could hold in your hand, like dirt, or something you could not, like freedom”

Going through some of the negative reviews for this one, I couldn’t help but feel many of these people are missing the purpose of this book.  You should go into this book paying attention to what Whitehead is trying to convey with this book: the brutality and oppression of slavery, rather than characterization or a smooth flowing plotline.  I literally read a bad review that said they didn’t like this book because it was too tragic… Seriously?!  Of course it’s tragic!  It is a book about slavery…  Did they expect puppies and rainbows? Obviously the truth is too hard for some people to hear.

“But nobody wanted to speak on the true disposition of the world.  And no one wanted to hear it.”

The Underground Railroad would make for an excellent book club selection.  Oprah selected it for her book club, Oprah’s Book Club, even before the book was published.  Rumor has it she even pulled some strings to have the book published a month early.  She liked it THAT much.  You can read a fascinating interview she did with Whitehead here → Oprah’s Interview With Colson Whitehead.

“Sometimes a slave will be lost in a brief eddy of liberation.  In the sway of a sudden reverie among the furrows or while untangling the mysteries of an early-morning dream.  In the middle of a song on a warm Sunday night.  Then it comes, always – the overseer’s cry, the call to work, the shadow of the master, the reminder that she is only a human being for a tiny moment across the eternity of her servitude.”

This is probably one of the most powerful novels I have ever read.  I can see why it was selected as one of the winners of the 2016 National Book Award.  Since finishing this book, I’ve often found myself thinking about it.  It seems that this one is going to be one of those books that sticks with me for years to come.

*Big thanks to Doubleday for providing me a copy via NetGalley in exchange for an honest review.

I’m the author of the novels Zone One; Sag Harbor; The Intuitionist, a finalist for the PEN/Hemingway award; John Henry Days, which won the Young Lions Fiction Award, the Anisfield-Wolf Book Award, and was a finalist for the Pulitzer Prize; and Apex Hides the Hurt, winner of the PEN Oakland Award. I’ve also written a book of essays about my home town, The Colossus of New York, and a non-fiction account of the 2011 World Series of Poker called The Noble Hustle. A recipient of a Whiting Writers’ Award, a Guggenheim Fellowship, and a MacArthur Fellowship, I live in New York City.

My latest book, The Underground Railroad, is an Oprah’s Book Club pick.

43 thoughts on “Book Review: The Underground Railroad by Colson Whitehead”

Books turn MUGGLES into WIZARDS 🧙‍♂️⚡️ I can now check Universal Studios and The Wizarding World of Harry Potter off my bucket list ✅ #Bookworm #Librarian #Books #HarryPotter #WizardingWorldOfHarryPotter #UniversalStudios #Bookish #Bibliophile
Had the opportunity to meet @rutasepetysauthor back in October while she was on tour for #TheFountainsOfSilence in Ohio @josephbethcincy. Such a fascinating author that really cares about sharing the under represented stories throughout history. Have you read TFoS yet? Do you have a favorite Sepetys book? • • • #Bookstagram #AuthorEvent #BookTour #HistoricalFiction #BookBlogger #Bookworm #Reading #BookLove
I suspect the Nargles are behind it... #LunaLovegood #HarryPotter #Ravenclaw
Always a delight to stop in at The Fine Print when I visit Lakeside 📚📖 @lakesideohio #Bookstore #Books #Reading #Bookworm #Bibliophile #Bookish #BookNerd #Lakeside
My first time visiting The Public Library of Cincinnati and Hamilton County @cincylibrary last night! I loved the gorgeous bookish fountain out front! I was also pleasantly surprised to see a polar bear in the library? What’s the story with the bear?!? Have you ever visited this library? • • #Library #Libraries #Bookish #Books #Reading #Bookworm #BookNerd #BookBlogger #Bibliophile
I was so excited to have the opportunity to attend An Evening with Nnedi Okorafor last night at The Public Library of Cincinnati and Hamilton County! Absolutely loved hearing about where she got her inspiration for her #Binti series! Have you read any of Okorafor’s books? • • • #NnediOkorafor #Author #AuthorEvent #BookEvent #Library #Bookworm #BookeNerd #ScienceFiction #Fantasy #BookBlogger #Bibliophile #Bookish
Follow on WordPress.com