August 31st: Books You Will Never Read
–Whether it’s from a series that you have outgrown or don’t wish to continue, or they are popular books that just don’t interest you, let us know what you don’t plan on reading.

There are many books that I have no interest in ever reading, however for this week’s theme I thought I would chose books that I will never read because they are too disturbing.  I would like to add a disclaimer that I am not saying these are “bad books,” just that I have no intention of reading them because I am overly sensitive with the subject matter.  Actually, most of the books on this list have very high ratings…

» A Child Called “It” by David Pelzer 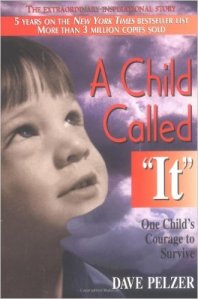 This book chronicles the unforgettable account of one of the most severe child abuse cases in California history. It is the story of Dave Pelzer, who was brutally beaten and starved by his emotionally unstable, alcoholic mother: a mother who played tortuous, unpredictable games–games that left him nearly dead. He had to learn how to play his mother’s games in order to survive because she no longer considered him a son, but a slave; and no longer a boy, but an “it.” Dave’s bed was an old army cot in the basement, and his clothes were torn and raunchy. When his mother allowed him the luxury of food, it was nothing more than spoiled scraps that even the dogs refused to eat. The outside world knew nothing of his living nightmare. He had nothing or no one to turn to, but his dreams kept him alive–dreams of someone taking care of him, loving him and calling him their son.

To five-year-old Jack, Room is the entire world. It is where he was born and grew up; it’s where he lives with his Ma as they learn and read and eat and sleep and play. At night, his Ma shuts him safely in the wardrobe, where he is meant to be asleep when Old Nick visits.

Room is home to Jack, but to Ma, it is the prison where Old Nick has held her captive for seven years. Through determination, ingenuity, and fierce motherly love, Ma has created a life for Jack. But she knows it’s not enough…not for her or for him. She devises a bold escape plan, one that relies on her young son’s bravery and a lot of luck. What she does not realize is just how unprepared she is for the plan to actually work.

Told entirely in the language of the energetic, pragmatic five-year-old Jack, Room is a celebration of resilience and the limitless bond between parent and child, a brilliantly executed novel about what it means to journey from one world to another.

I know this book does not center around child abuse per se, but I also have a hard time with captivity stories.

Will Graham stands in a silent, empty house communing with a killer. An FBI instructor with a gift for hunting madmen, Graham knows what his murderer looks like, how he thinks, and what he did to his victims after they died. Now Graham must try to catch him. But to do it, he must feel the heat of a killer’s brain, draw on the macabre advice of a dangerous mental patient, Dr. Hannibal Lecter, and follow a trail of microscopic clues to the place where another family has already been chosen to die–and where an innocent woman has found the Dragon first.

I don’t do cannibalism.  I have a very weak stomach and this literally makes me ill just thinking about it.

An acclaimed bestseller and international sensation, Patrick Suskind’s classic novel provokes a terrifying examination of what happens when one man’s indulgence in his greatest passion — his sense of smell — leads to murder.

In the slums of eighteenth-century France, the infant Jean-Baptiste Grenouille is born with one sublime gift — an absolute sense of smell. As a boy, he lives to decipher the odors of Paris, and apprentices himself to a prominent perfumer who teaches him the ancient art of mixing precious oils and herbs. But Grenouille’s genius is such that he is not satisfied to stop there, and he becomes obsessed with capturing the smells of objects such as brass doorknobs and fresh-cut wood. Then one day he catches a hint of a scent that will drive him on an ever-more-terrifying quest to create the “ultimate perfume” — the scent of a beautiful young virgin. Told with dazzling narrative brillance, Perfume is a hauntingly powerful tale of murder and sensual depravity.

There is a movie adaptation of this book that I somehow stumbled upon one day.  I had to turn it off because it freaked me the f*** out.

» It by Stephen King

The story follows the exploits of seven children as they are terrorized by an eponymous being, which exploits the fears and phobias of its victims in order to disguise itself while hunting its prey. “It” primarily appears in the form of a clown in order to attract its preferred prey of young children. The novel is told through narratives alternating between two time periods, and is largely told in the third-person omniscient mode. It deals with themes which would eventually become King staples: the power of memory, childhood trauma, and the ugliness lurking behind a façade of traditional small-town values.

I am not particularly scared of clowns, however I think this book would probably give me a complex if I read it…

Have you read any of these books?

Which books will you never read?

*Feel free to link to your own T5W post!

17 thoughts on “Top 5 Wednesday: Books I Will Never Read”