If you have yet to read Harry Potter and the Cursed Child and are hesitant to pick it up due to all the mixed reviews, then I invite you to continue on with this post.  I will be sharing why I think it is a worth while read and some things to take into consideration before you decide to give it a go. 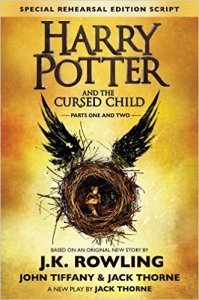 Based on an original new story by J.K. Rowling, Jack Thorne and John Tiffany, a new play by Jack Thorne, Harry Potter and the Cursed Child is the eighth story in the Harry Potter series and the first official Harry Potter story to be presented on stage. The play will receive its world premiere in London’s West End on July 30, 2016.

It was always difficult being Harry Potter and it isn’t much easier now that he is an overworked employee of the Ministry of Magic, a husband and father of three school-age children.

While Harry grapples with a past that refuses to stay where it belongs, his youngest son Albus must struggle with the weight of a family legacy he never wanted. As past and present fuse ominously, both father and son learn the uncomfortable truth: sometimes, darkness comes from unexpected places.

When the first Harry Potter book came out in 1997, I was 10 years old, so I had the privilege of growing up with Harry Potter being a big part of my life.  When the last book came out in 2007, I was a 20 year old college student, however that didn’t stop me from going out at midnight to grab the finale to the series I held so close to my heart for so many years.  When I heard there was going to be a “8th book,” I could hardly contain myself!   As more and more information came out, we learned that Harry Potter and the Cursed Child was not technically going to be a book, but rather a script of a play.  At this news, I admit I was disappointed, however a script of a play is better than nothing right?

I had such a feeling of nostalgia while reading Harry Potter and the Cursed Child, that I was literally in tears for the entire first act.  All the fond memories of my brothers and I going to midnight release parties for the last few Harry Potter books and then going home to devour each book until the sun came up came flooding back to me.   To me, this  script felt like I was getting the chance to catch up with old friends.

I am not going to go into the details of the plot, however I will say that we see some common themes that we have come to expect in our beloved Harry Potter books: friendship, mischief, good vs. evil, coming of age, loyalty, courage, sacrifice, etc. etc.  The plot felt very “Harry Potter-ish” to me because of this.  I adored getting a peak of the next generation of characters, and loved catching up with some familiar ones.  Due to the fact that Harry Potter and the Curse Child is a script, and therefore all dialogue, it is a very quick read.  I think I finished it in around 3 hours.  I would have read it in one sitting if I didn’t have to stop and do the adult thing.

Overall, I really enjoyed reading Harry Potter and the Cursed Child.  It was a trip down memory lane that I desperately needed 9 years after the 7th book.  It rekindled my love for Harry Potter and made me want to re-read the series all over again.  I know there have been a lot of mixed reviews, therefore I have some advice for those who have yet to read it…

If you are on the fence about reading Harry Potter and the Cursed Child because of all the disappointed reviews, here are a few things to consider before reading…

» This is NOT a book.  This is a script.  There are no vivid descriptions of magical worlds, fantastical beasts, or action packed scenes that we would expect from a Harry Potter book.  Because this is a script, it is all dialogue between characters.  While reading, instead of trying to imagine what is going on like a movie, try and imagine you are watching the play take place on stage.

» It should have never been marketed as “The eighth story.  Nineteen years later.”  Why?  Because it’s not.  I think it was a mistake to market it as such, because it set the stage for disappointment.  This is not a book written by J.K. Rowling, this is a PLAY that Rowling had some input on.  Basically, Rowling okayed the plot and Jack Thorne wrote the script.  Consider this a supplement to the Harry Potter series instead of the next book in the series.  Some have criticized it for being fanfiction, but it kind of is… Isn’t fanfiction when someone takes someone else’s characters and creates their own story?  If it helps you to avoid disappointment, think of this as fanfiction.

» There are definitely some flaws in the plot line, however you should take into consideration that plays have time restrictions, so the playwrite has to create an entertaining story that occurs in a short amount of time.

» Do all our favorite characters feel the same?  No, they don’t. The funny thing about people is that they grow up.  I am not sure about you, but I am not the same person I was when I was a teenager…

» Don’t take it too seriously or try to over analyze it.  Think of Harry Potter and the Cursed Child as your chance to revisit old friends and take a trip down memory lane to when you first experienced the phenomena that is Harry Potter.

“Harry, there is never a perfect answer in this messy, emotional world. Perfection is beyond the reach of humankind, beyond the reach of magic. In every shining moment of happiness is that drop of poison: the knowledge that pain will come again. Be honest to those you love, show your pain. To suffer is as human as to breathe.”

“Those we love never truly leave us, Harry. There are things that death cannot touch.”

“The truth is a beautiful and terrible thing, and should therefore be treated with great caution.”

Jack Thorne writes for theatre, film, television and radio. His theatre credits include Hope and Let The Right One In both directed by John Tiffany, The Solid Life of Sugarwater for the Graeae Theatre Company, Bunny for the Edinburgh Fringe Festival, Stacy for the Trafalgar Studios, 2nd May 1997 and When You Cure Me for the Bush. His adaptations include The Physicists for the Donmar Warehouse and Stuart: A Life Backwards for Hightide. On film his credits include War Book, A Long Way Down and The Scouting Book for Boys.  For television his credits include The Last Panthers, Don’t Take My Baby, This Is England, The Fades, Glue and Cast-Offs and the upcoming National Treasure.  In 2012 he won BAFTAs for best series (The Fades) and best serial (This Is England 88).