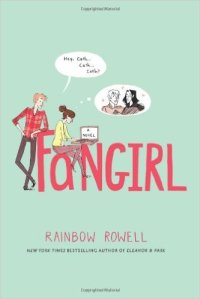 A coming-of-age tale of fan fiction, family and first love.

Cath is a Simon Snow fan.

Okay, the whole world is a Simon Snow fan…

But for Cath, being a fan is her life—and she’s really good at it. She and her twin sister, Wren, ensconced themselves in the Simon Snow series when they were just kids; it’s what got them through their mother leaving.

Reading. Rereading. Hanging out in Simon Snow forums, writing Simon Snow fan fiction, dressing up like the characters for every movie premiere.

Cath’s sister has mostly grown away from fandom, but Cath can’t let go. She doesn’t want to.

Now that they’re going to college, Wren has told Cath she doesn’t want to be roommates. Cath is on her own, completely outside of her comfort zone. She’s got a surly roommate with a charming, always-around boyfriend, a fiction-writing professor who thinks fan fiction is the end of the civilized world, a handsome classmate who only wants to talk about words… And she can’t stop worrying about her dad, who’s loving and fragile and has never really been alone.

For Cath, the question is: Can she do this?

Can she make it without Wren holding her hand? Is she ready to start living her own life? Writing her own stories?

And does she even want to move on if it means leaving Simon Snow behind?

First off, what exactly is a “fangirl”?  Well since you asked…

As some of you may recall, I read Fangirl to get a better understanding of one of my best friends in real life (let’s refer to her as “M”).  This friend is the epitome of a fangirl.  M is active in many different fandoms, but her #1 fandom is the TV show Once Upon A Time.   Specifically, she is completely obsessed with the character that plays Captain Hook in the show, Colin O’Donoghue.  When I say OUAT is her no.1 fandom, we are talking tattoos (she has 2 OUAT tattoos), clothing, blankets, Funko Pops, collectables, planning trips to Canada to watch filming… the whole 9 yards.   She even writes OUAT fan fiction!  Does this all sound familiar?  That’s right, she is Cath.  I have never really been able to relate to M’s fangirlish ways.  I just didn’t get it.  How could someone watch the same TV shows OVER and OVER again?  Who really talks about these characters as if they are real people?  Planning a vacation to Canada to watch the filming for the show?  It all seemed a bit crazy to me.  When M started writing fan fiction, I thought she had gone off the deep end.  The thing is, M is actually a very talented writer!  Why would she “waste” her time writing fan fiction when she could be writing her own stories?  One night when we were having a conversation about how I found it hard to relate to/understand her, she mentioned that the book Fangirl would be the perfect book to read to understand her better.  I ordered  Fangirl that night.

I knew going into this book that it wasn’t going to be one of my typical reads.  I decided that I was not going to be reviewing this book based on my reading preferences, but rather looking at it as a way to better understand my friend, and what it means to be a “fangirl.”

That being said, there were three main things that I took away from this book…

» Social Anxiety can be debilitating

Now I’m pretty sure not all fangirl’s have social anxiety, however I do think it tends to be a trend among those who label themselves as “fangirls.”  When I read how much social anxiety Cath had, it broke my heart.  Missing out on parties?  Not being open to meeting new people?  Eating protein bars because she didn’t want to ask someone where the cafeteria was on campus?!?  These things really happen to people?  I just kept thinking how exhausting it must be to have so much anxiety over new social situations.  Think about how much people who suffer from social anxiety miss out on life?  This really made me appreciate the fact that  I have never personally had any issues with social anxiety.

While talking with M, she informed me that she has struggled with social anxiety, however that it has gotten easier over the years.  Ironically enough she is a high school teacher… How does that work?  She said that for her, she is fine as long as she is in control of the situation.

When I thought of fandoms, I always thought of people who were obsessed with things like superheroes and went to ComicCon… Not that there is anything wrong with that, it just personally isn’t my thing.  I didn’t really realize that a fandom is NOT just people who read comic books or dress up like characters from Lord of the Rings, but a fandom is any group of people who share a common interest.   It is a community!  Who wouldn’t want to get together with people with similar interests and bask in the awesomeness of that interest?  You know what I say?  However you choose to celebrate your fandom, you should go for it!  You want to buy apparel, action figures, decorations, etc etc?  Do it!  You want to get a tattoo to show everyone your commitment?  You go girl/boy!

This really made me take a step back and think about how people of certain fandoms are looked down upon for being “weird” while others are deemed acceptable.  Why is it weird for someone to dress up like their favorite superhero and go to a convention, but it’s not weird for someone to wear their favorite football player’s jersey and participate in a fantasy football draft?  They are both taking part in their perspective fandoms…  At the end of the day, we all have our own fandoms and shouldn’t judge others for which fandoms the choose to participate in.

» Fan fiction is a way to keep favorite stories alive

This was probably my biggest take away from this book.  Before reading this book, I did not get fan fiction AT ALL. I really didn’t understand why someone would spend their time and energy on fan fiction, when they could put that time and energy into writing their own fictional work.  Also, why would you read fan fiction?  If the author wanted the story to go in that direction, wouldn’t they have written it that way?  Fangirl does an AMAZING job at explaining what fan fiction really is and what it means to so many people.

“The whole point of fanfiction,” she said, “is that you get to play inside somebody else’s universe.  Rewrite the rules.  Or bend them.  The story doesn’t have to end when Gemma Leslie gets tired of it.  You can stay in this world, this world you love, as long as you want, as long as you keep thinking of new stories –“

“But I don’t want to write my own fiction,” Cath said, as emphatically as she could.  “I don’t want to write my own characters or my own worlds – I don’t care about them.”  She clenched her fists in her lap.  “I care about Simon Snow.  And I know he’s not mine, but that doesn’t matter to me.  I’d rather pour myself into a world I love and understand than try to make something up out of nothing.”

Ahhhhhhh!!  It all makes sense now.  When you fall in love with a world, you want to do everything in your power to keep that world alive; to have some control over it.  It can live on forever if you choose to keep giving it life. 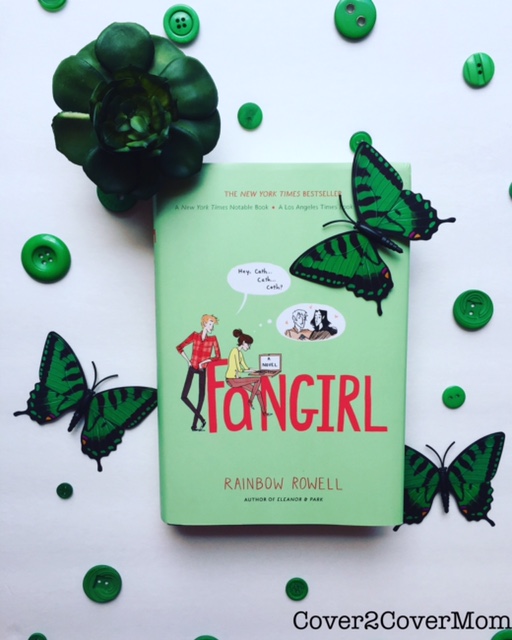 This is why Fangirl was so successful.  It hit home for so many people, many who may have felt that no one understood them.  Bravo Rowell for writing a book that was relatable to so many!  Was this book super relatable to me?  Not particularly… HOWEVER it really gave me a fresh perspective on what it means to be a “fangirl,” fandoms in general, and above all some insight into my friend’s world.

Are you a fan of Once Upon A Time? 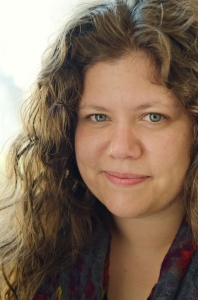 When she’s not writing, Rainbow is reading comic books, planning Disney World trips and arguing about things that don’t really matter in the big scheme of things.

She lives in Nebraska with her husband and two sons.

What did you think of Fangirl?  Did you read it because you are a fangirl/boy?  Did Rowell get it right?