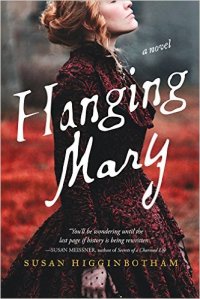 Meet Mary Surratt, the woman who could have saved Lincoln. Find out what stopped her in this vivid reimagining of Lincoln’s assassination

In 1864 Washington, one has to be careful with talk of secession. Better to speak only when in the company of the trustworthy, like Mrs. Surratt. A widow who runs a small boarding house, Mary Surratt isn’t half as committed to the cause as her son, Johnny. If he’s not escorting veiled spies, he’s inviting home men like John Wilkes Booth, the actor who is even more charming in person than he is on the stage. But when President Lincoln is killed, the question of what Mary knew becomes more important than anything else.

Based on the true history of Mary Surratt, Hanging Mary reveals the untold story of those on the other side of the assassin’s gun.

I came across Hanging Mary while scanning though available audiobooks on Hoopla.  The title and cover caught my eye immediately.  Who was this Mary and why did she hang?  When I first saw the cover and title, I guessed that this book was going to be about a witch… not even close… Hanging Mary is actually about the assassination of Abraham Lincoln; specifically, it is about one of the conspirators, Mary Surratt.

I must admit, I had never given much thought to the assassination of President Abraham Lincoln.  Aside from knowing the name of the President’s assassin, John Wilkes Booth, and that it took place in a private box in Ford’s Theatre, I knew practically nothing about it… I had no idea there was a group of conspirators in on the plot to kill the president.  I was intrigued…

Hanging Mary is told through two alternating perspectives: Mary Surratt, and her boarder, Nora Fitzpatrick.  After doing some research on Mary Surratt, I was impressed with the accuracy of Higginbotham’s depiction.  I always appreciate a book that is well researched and true to the era.   I think people often take for granted the amount of research and grunt work that goes into writing Historical Fiction.  Kuddos to Higginbotham for creating such an authentic rendition of such a horrible event in American history.

Unfortunately,  Hanging Mary came up a little short and I was left wanting more at the end.  The pacing of the first half of the book was painfully slow.  The pacing improves in the second half of the book, but it was too late by that point.  While reading Hanging Mary,  I always felt “left in the dark” since the book was told through the eyes of two people not directly involved in the conspiracy.  I think it would have been more beneficial to not only have the story told through Mary’s eyes, but also through the eyes of someone directly involved in the conspiracy, like Mary’s son Johnny.  I feel this strategy would have helped with the pacing and aided in “spicing up” the plot.  While I liked Nora as a character, Nora’s point of view was not relevant in advancing the plot.

The second half of this book was the book’s saving grace.  It is progressively better than the first half both in pacing and character development.  The second half  of Hanging Mary focuses on the trial and execution of Mary Surratt.  I was really able to feel the emotions, specifically the fear and anxiety, throughout this portion of the book.  Up until this point, Mary seems vapid and lacking emotion, however here we really get into her head and get to experience what it would have felt like to be on trial for conspiring to kill the president, then sentenced to hang.   Higginbotham really outdoes herself with the final chapters and the depiction of Mary walking  to the gallows.  Wow.  I had a pit in my stomach while reading the conclusion of this book.

Recap: Hanging Mary is remarkably accurate depiction of a horrific event in American history.  The first half of the book is slow, but Higginbotham recovers in the second half.  While the concept for this book was brilliant, Hanging Mary fell a little short.  I was left wanting more after finishing.  The story would have benefited being told from the POV of one of the primary conspirators in addition to Mary’s POV.

Have you read Hanging Mary?  What were your thoughts?