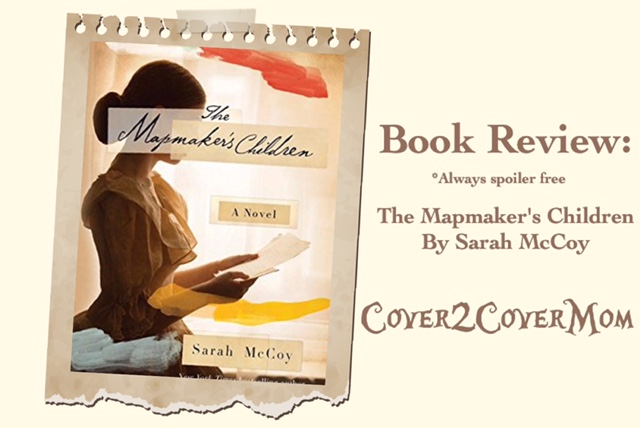 When Sarah Brown, daughter of abolitionist John Brown, realizes that her artistic talents may be able to help save the lives of slaves fleeing north, she becomes one of the Underground Railroad’s leading mapmakers, taking her cues from the slave code quilts and hiding her maps within her paintings. She boldly embraces this calling after being told the shocking news that she can’t bear children, but as the country steers toward bloody civil war, Sarah faces difficult sacrifices that could put all she loves in peril.
Eden, a modern woman desperate to conceive a child with her husband, moves to an old house in the suburbs and discovers a porcelain head hidden in the root cellar—the remains of an Underground Railroad doll with an extraordinary past of secret messages, danger and deliverance.
Ingeniously plotted to a riveting end, Sarah and Eden’s woven lives connect the past to the present, forcing each of them to define courage, family, love, and legacy in a new way.

The Mapmaker’s Children first peeked my interest because it’s  about the daughter of abolitionist  John Brown and the Underground Railroad.   I am fascinated with the American Civil War and am always looking for a good Civil War historical fiction.  I’m a sucker for any HF that give a fresh new perspective on significant events in history.

After finishing The Mapmaker’s Children, I had conflicting feelings.  On one hand, I really did enjoy the book, but on the other there were a few issues holding me back from really loving it.

First off, let’s talk cover.  There is just something about it that speaks to me.  It just feels warm and soft to me.  I really enjoy how the woman reading the letter is back lit by the window behind her.   I imagine the woman on the cover is Sarah herself reading a letter from dear Freddy by the morning light coming through the window.  A perfect cover for the content of this book.  I also adore the random brush strokes of paint, another good tie-in with the book.  Bravo to McCoy and her cover design team.  I also enjoyed the little creative touches inside the book – documents within the book, the recipe at the end, and the author’s notes were all clever personal touches that I appreciate very much in a book!

The Mapmaker’s Children is the story of two women, Sarah and Eden.  Sarah’s story takes place during the 1860s, while Eden’s takes place in present day.  This is a historical fiction that weaves back and forth between time and different points of view.  While I enjoy this technique, it can be risky.  In my opinion, this method isn’t easy to pull off.  When executed well, you get an amazing book that flows and intertwines two stories, however if not done correctly, you have one story that out shines the other.   In this case, I didn’t feel as if one story outshined the other, actually I enjoyed both stories, however I did not feel like the stories flowed very well together.  Furthermore, the connection between the stories felt forced.  I feel these stories would have been better as two independent books with further development of each story.

Another risky move was choosing to write about a character going through infertility.   The issue here is not the author’s depiction, but rather the character being relatable to the audience.  The majority of people do not know what it’s like to go through infertility, therefore they would not be able understand or connect with a character going this.  McCoy hit the nail on the head with her accurate depiction of how someone who is going through infertility would feel and act.   The fact of the matter is that only those who have been personally effected by infertility would understand the character Eden, whether they went through it themselves, or watched a close family member or friend struggle.  Infertility wears a woman down body and soul.  The hormone induced mood swings, feelings of isolation, estrangement from loved ones, depression, anxiety, etc etc. While reading other reviews of this book, a reoccurring theme was that people did not care for Eden.  They felt she was too cold and bitter, however I saw her as what she really was, emotionally exhausted and broken.  Overall, I really enjoyed Eden’s story.  Over the course of the book, we really see Eden start to heal by breaking down the walls that had been slowly going up over the years.  Eden doesn’t do this alone, but with the help from a neighbor girl, Cleo, and an adopted puppy named Cricket.  Cleo and Cricket give Eden a purpose, and bring Eden out of her dark place.  I really enjoyed Cleo’s character and her relationship with Eden.

Sarah’s story was equally as enjoyable.  I like that she had a srong personality but that she was also flawed by being extremely stubborn.  Actually, I am very similiar to Sarah, so she  was easy to relate to. The romance in Sarah’s story was very well done.  I particularly enjoyed the correspondence by letter between Sarah and her love interest; a friendship which slowly begins to develop into more.  I was fascinated with the different ways in which the UGRR maps were hidden; paintings, quilts, dolls, etc.  Unfortunately this was Sarah’s only contribution to the UGRR… I was expecting Sarah to be a little more involved, or that the story would expand further about the workings of the UGRR, but it didn’t.  It was more of a behind the scenes look, which was gripping, but I would have liked McCoy to have expanded a little more.  Sarah’s story was compelling enough to have stood alone without Eden’s story.

Bottom Line:  There are two separate stories within The Mapmaker’s Children that would have been better told separately.  I enjoyed this book, but did not love it. Sarah McCoy is definitely a talented writer and storyteller, so I will definitely check out her other works.

“…when a beating hear stopped, there was no black or white, only blood-red.  The flesh was equal.  It was the character of a man that made him better or worse.”

“Accident, blessing in disguise, fate, fortune, or happenstance – they were definitions of the same: life with no guarantee of happy ending.  What fable and history could agree upon was that everybody was searching for their ever-after, whatever that may be.”

*Thank you to Sarah McCoy and Blogging For Books for sending me a copy of this book in exchange for an honest review.

SARAH McCOY is the New York Times, USA Today, and international bestselling author of The Mapmaker’s Children; The Baker’s Daughter, a 2012 Goodreads Choice Award Best Historical Fiction nominee; the novella “The Branch of Hazel,” featured in the anthology Grand Central; and The Time It Snowed in Puerto Rico.

Sarah’s work has been featured in Real Simple, The Millions, Your Health Monthly, Huffington Post and other publications. She has taught English writing at Old Dominion University and at the University of Texas at El Paso.

The daughter of an Army officer, her family was stationed in Germany during her childhood. She calls Virginia home but presently lives with her husband, an Army physician, and dog, Gilbert, in El Paso, Texas.

12 thoughts on “Book Review: The Mapmaker’s Children by Sarah McCoy”