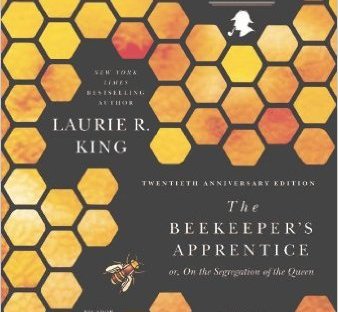 In 1915, Sherlock Holmes is retired and quietly engaged in the study of honeybees in Sussex when a young woman literally stumbles onto him on the Sussex Downs. Fifteen years old, gawky, egotistical, and recently orphaned, the young Mary Russell displays an intellect to impress even Sherlock Holmes. Under his reluctant tutelage, this very modern, twentieth-century woman proves a deft protégée and a fitting partner for the Victorian detective. They are soon called to Wales to help Scotland Yard find the kidnapped daughter of an American senator, a case of international significance with clues that dip deep into Holmes’s past. Full of brilliant deduction, disguises, and danger, The Beekeeper’s Apprentice, the first book of the Mary Russell–Sherlock Holmes mysteries, is “remarkably beguiling” (The Boston Globe).

When one of my Goodreads book clubs selected The Beekeeper’s Apprentice for their monthly read, I was apprehensive at first.  I don’t typically read mystery novels…. like ever.  You would think with majoring in Criminal Justice in college that I would frequent the murder/crime mystery genre, however I find that many books and TV programs over exaggerate and embellish the criminal justice system (investigations, forensics, legal proceedings, etc)  which tends to ruin it for me.   When I read the synopsis and found out that this book takes place during the early 1900s, I relaxed a little bit.  I was still  going to be within the realm of historical fiction (insert sign of relief here)  Also while reading the synopsis, I discovered that Sherlock Holmes was going to be one of the main characters, which peaked my interest.  I was intrigued with the premise of the book being about Holmes taking on a apprentice, and that apprentice being a 15 year girl none the less.  I decided that this may not be so bad after all!
I am so glad that I overcame my reservations and took the plunge.  This book kept me interested and wanting to know what was going to happen next.  For me,  the author had just the right amount of mystery, without over-doing it.  The cases were the stereotypical “Sherlock Holmes types of cases” where things are not what they seem, which keeps you guessing.   This book isn’t graphic or gory, which I liked.  I also liked how the book was not just about the cases, but also about Holmes and Russell and their evolving relationship.  The witty banter and dry humor between Russell and Holmes was entertaining.   I will admit though, at times I was often confused about the relationship between this young Russell and the much older Holmes… often worrying that the author was going to switch from the “father-daughter” type relationship to a inappropriate romantic relationship… I am not sure if I was reading certain situations the wrong way, or if this was intentional on the author’s part.   Since I have never read any of the Sherlock Holmes books by Conan Doyle, I did not have any preconceived notions on how Holmes should be  portrayed. However, after reading discussions on the book, those who had read Doyle’s books generally agreed that Holmes seemed more realistic in this series.  I also read some mixed reviews about the character Mary Russell.  Some thought that she was too conceited and essentially a spoiled brat.  I can see what they are saying to a degree, however I feel like her egotistic tendencies were more of a front to keep people at a distance.  Traumatic life events tend to make people guarded.  I like to think of Russell as confident in her abilities, and that she demanded respect.  She was not going to settle for being treated as anything less than a intellectual equal to Holmes.  I admire a girl who goes after what she wants and won’t let anything or anyone get in her way.   I’m all about strong female lead characters.
I will defiantly be looking into the other books in the Mary Russell series!  I would recommend this book to anyone who enjoys lighter hearted historical mysteries.  This was a charming read.

“A hive of bees should be viewed, not as a single species, but as a triumvirate of related types, mutually exclusive in function but utterly and inextricably interdependent upon each other.  A single bee separated from its sisters and brothers will die, even if given the ideal food and care.  A single bee cannot survive apart from the hive.”
-The Beekeeper’s Apprentice

Click here to read an excerpt from The Beekeeper’s Apprentice

About the Author (via laurierking.com) 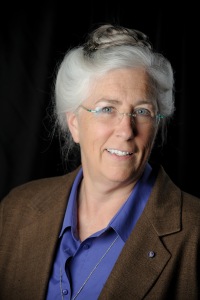 Laurie R. King is the third generation in her family native to the San Francisco area. She spent her childhood reading her way through libraries up and down the West Coast; her middle years raising children, renovating houses, traveling the world, and doing a BA and MA in theology.  (Her long autobiography goes into detail about how she uses these interests.)  King now lives a genteel life of crime, on California’s central coast.

Her crime novels are both serial and stand-alone. First in the hearts of most readers comes Mary Russell, who met the retired Sherlock Holmes in 1915 and became his apprentice, then his partner. Beginning with The Beekeeper’s Apprentice, Russell and Holmes move through the Teens and Twenties in amiable discord, challenging each other to ever greater feats of detection.

In the Russell & Holmes stories, King explores ideas—the roots of conflict in the Middle East and Afghanistan; feminism and early Christianity; patriotism and individual responsibility—while also having a rousing good time.  Various stories revisit The Hound of the Baskervilles and Kipling’s Kim, set a pair of Bedouin nomads down in a grand country house in England, and offer an insider’s view of the great quake and fire of 1906, all the while forging an unlikely relationship between two remarkably similar individuals who happen to be separated by age, sex, and background.